Daily Inspiration: “All your base are belong to us!”

“All your base are belong to us!” – Futurist  Jim Carroll 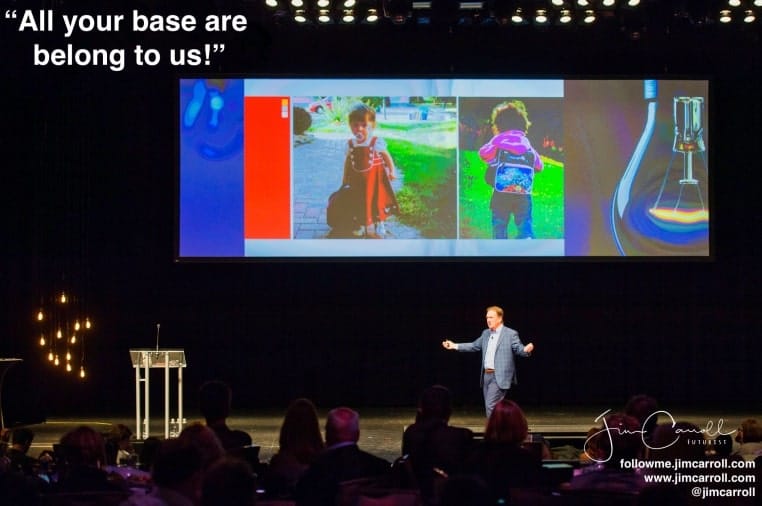 You probably don’t know the significance of the phrase.
And that is entirely the point.
You don’t. They do.

The generation who understands the significance of the phrase are the ones who will reshape our world with the oxygen of the connectivity that they have inhaled since birth. They’ve been weaned on the Internet, and in 2019 and beyond, they own the future. The old folks don’t.
We are in the midst of a vast, sweeping and profound generational transition, and it is one of the defining trends of our time.

That’s trend #15 in my 19 Trends for 2019: “The Acceleration of Generational Transformational Change”

“All your base are belong to us”? It originated as a bad translation in a Japanese video game in 1991 but the phrase went viral in 2001, years before the arrival of viral social networks.
It’s a statement of power; it’s a comment that indicates someone knows more than you know; it’s a phrase of the next generation. Study the zeitgeist, and you would have seen it emerge at the time, and understand its significance. I remember seeing it emerge and go viral; I get the context whenever it has been used since.

Boomers struggle with tech – they grew up with Basic, COBOL and punch cards. My kids are 23 and 25, and they laugh at the fact I actually sold close to a million books in the ’90’s that explained the Internet to people.

I’ve been online since 1982 – I started with a 300 baud acoustic coupler. (Look it up). Even back then, In understand that connectivity would change the world. And it has, both good and bad.

But what happens when the politician who can’t manage their iPhone retires and leaves power – and the Nintendo generation takes over?
It’s happening right now. The first generation in power is mostly white, old, technologically incompetent. The next generation is diverse, connected, entrepreneurial, fast, collaborative and global.

I don’t know about you, but my hopes are with the latter.