Daily Inspiration: “Spend your time with the optimists! Those who are relentlessly positive!”

“Spend your time with the optimists! Those who are relentlessly positive! Who see opportunity around each and every corner! Because as you do so, you will help prove to them that they are right!” – Futurist  Jim Carroll 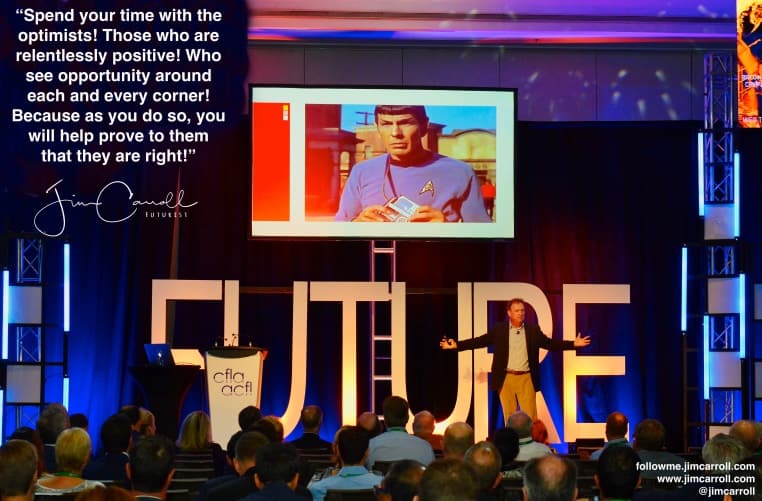 We leave #Oman today with a heavy heart – have I mentioned it is a beautiful country, with absolutely wonderful people?

At my keynote the other day, senior government and business leaders spoke of the need for the region to move into the era that involves the end of the oil economy. There is a buzz here, as there is elsewhere in the region, that the future can be invented here. That the people and the economy need not be held back from pursuing the next opportunities of the 21st century.

A nation of optimists aligned to the future, as opposed to those I meet elsewhere who long for the past, and who would destroy their future through ill-thought barriers, walls and hatred of the ‘other.’

I don’t wear rose coloured glasses though. I know there are deep, complex political, social and national issues that the region is dealing with, and that people are trying to address. There are tremendous challenges in creating enough economic opportunity and momentum to keep the next generation employees and full of hope. There is and always will be an undercurrent of potential protest and rebellion.

But having said that, I also sense that there is an awareness that despite potential challenge, there is nothing but opportunity that is ahead.

The future is all about mindset. Attitude. Approach. Positive ideas. Relentless thinking about how to overcome barriers. Openness to other people and other ideas.

I leave Oman a better person, having learned much about those attitudes and beliefs. It’s all the future, and we are all a part of it.