Daily Inspiration: “Be defiant. No one succeeds through conformity!”

“Be defiant. No one succeeds through conformity!” – Futurist Jim Carroll 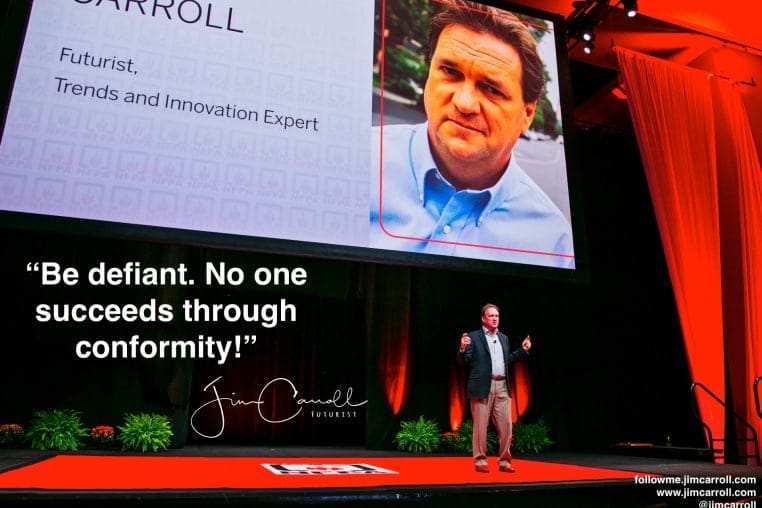 When I started this crazy speaking career 25 years ago, I never thought I’d find myself in front of 7,000 people in Las Vegas. But it happened. And somewhere along the way on the journey, I decided that I want to be in the top tier of the industry – I wanted the big stage!

I got there over time through the sheer stubbornness of my actions.

When I went online in 1982, some 11 years before the Internet went mainstream, I was convinced this was a history altering technology, and decided to build a career around it. People told me that I was being a fool, throwing away an absolutely successful career path. (I’m a CA/CPA by professional background!) When I went to write a book about the Internet in 1993, I was told it wouldn’t sell. I ended up writing 34 of them during the 90’s with a great friend, and we sold close to a million books.

When I took up skiing at the age of 40, people laughed at my snowplow technique. I learned to carve.

When I took up golf at the age of 50, some folks told me it was a little bit late to start. I’m now a 16 handicap.

The point is, you are probably surrounded by people who live in a bubble of negativity, and who try to draw you in by telling you that you can’t accomplish things. You need to limit your thinking like other people do.
Conform, like everyone else. You won’t succeed. You are bound to fail.

Prove them wrong. Each and every day. Focus on succeeding by doing things that don’t fit the norm. And be defiant and stubborn with your determination!

Heck, it worked for me!