I was recently interviewed by the UK based Automotive Megatrends magazine, for a special report for subscribers. It offers up my thoughts on the challenges and opportunities faced in the auto industry out to 2020.

The full PDF version of the article can be found in the image here. The text follows below.

Jim Carroll on the automotive world of 2030
What’s coming in the next 15 years could be mind-boggling, says futurist Jim Carroll. As told to Martin Kahl

To paraphrase Bill Gates, most people tend to overestimate the rate of change that will occur on a two-year basis, and underestimate how much change will occur on a ten-year basis. Let’s put that in perspective: Think about the change that has occurred in the last ten years and then consider what might come in the next ten to 15 years: it could be mind boggling. Ten years ago, we only just had YouTube and FaceBook, but we didn’t have Twitter, and we didn’t have the iPhone.


One of the biggest trends that is unfolding, and one that will have a huge impact on transportation, is what I call hyper connectivity, or what people are referring to as the Internet of Things. Everything that is a part of our daily lives will be connected to the Internet – and that has massive implications.

As for how cars and trucks fit into this, there are two paths. One is full vehicle autonomy, the Google self-driving car trend. The other is the development of intelligent highway and intelligent road infrastructure that interacts with everything else via a variety of methodologies that will help the car to drive in a safe manner with a human inside. I don’t think it’s a discussion of whether we will all be either in autonomous cars or human-driven cars – I think there’s going to be a mixture of both.

But is the automotive industry doing enough to prepare for future drivers’ needs?

I think the problems are several-fold. The famous image is that of a two-year-old child who walks up to a 50 inch LCD TV and starts pressing it, but she doesn’t get the level of interaction that she expects. Companies like Google and Apple, companies which operate at the speed of Silicon Valley, will increasingly impact the speed of change of vehicle technology, and I don’t think automotive companies are ready for that.

The car companies run the risk of falling behind unless they form very unique and innovative partnerships with some of those tech companies.

In 2003, I made up this little story that maybe Google could decide to become a car company. It wouldn’t actually build the car, simply have it contract manufactured. It wouldn’t have dealerships, the cars would be sold online and delivered to you by FedEx. The car would come in a box, and it would have party in the box too, so that you could celebrate with your neighbours. I was laughed at back then… But maybe that is the business model for the future.

Everybody wants to understand the future. Every organisation has people that plan for what comes next. I think the challenge for the automotive industry could be hubris, in terms of thinking the industry is too big for others to enter: “We’re the big car companies, we’re always going to be the big car companies. The competitors we have today will be the competitors we’ll have ten years from now.”

A car brought out in 2015 was probably modelled in 2009, tested in 2011, put into production in 2013, and sold in 2015. That car, by 2020, is going to look like it’s from the olden days. It’ll be like having an old-generation smartphone. That will have a huge impact on the resale value of that car. Because of how quickly technology becomes obsolete, automotive companies need to build in an increasing degree of modularity, so that the car can easily receive the latest technology updates.

I think that in 2030 we’re going to see a host of new business models.

Rather than being based on runs of several hundred thousand vehicles that go into inventory, I see growth in business models that are based on build-to-demand. The sharing economy will shape business models in 2030.

The automotive industry is already recognising, in some of its new initiatives, that an entire generation is rejecting the concept of buying a vehicle for a full time purpose.In addition to the rise of hyperconnectivity and new business models, there are tremendous advances occurring with solar and alternative forms of power generation that will affect the automotive world of 2030.

Innovative companies focus on innovation during periods of economic uncertainty so that they are well positioned to come out strong on the other side.

It will be fascinating to see what emerges.

As the world wakes up on August 24, 2015, to news of turmoil with global stock markets, it’s important to remember the key lessons learned from past recessions – those who focus on innovation despite economic uncertainty, are those who succeed in the long run.
Now is not the time for panic, nor to throw away critical strategic innovation opportunities. Indeed, history has taught us otherwise.

Here I am in Las Vegas, speaking to this very issue.

Wrap up summary video from Sao Paolo WorldSkills 2015: “I’m here to inspire the audience about the future, I’m here to get them thinking about the future, and I’m here to get them thinking about what they need to do in terms of innovating and challenging themselves to change to keep up with a fast future.”
Based on the feedback so far, I think I succeeded. Here’s the summary video about my keynote and the panel discussion that followed.

I’ll have a lengthy post of my WorldSkills event soon; let me say it is just one of the most mind-boggling events I have ever attended and participated in – and I’ve been in this business for 20 years!]]>

Worldskills is a massive global organization that focuses on accelerating young people into new skilled trades and careers, both new and old.

They invited me to open this massive global skills competition and conference in Sao Paulo, Brazil, with a talk on the future of careers, the arrival of new jobs and the disappearance of old jobs, the rapid evolution of knowledge, and how to turn these trends into opportunities for national and corporate competitive advantage.

This is one of The premier global HR/skills conferences and so it was an absolute thrill to be involved! 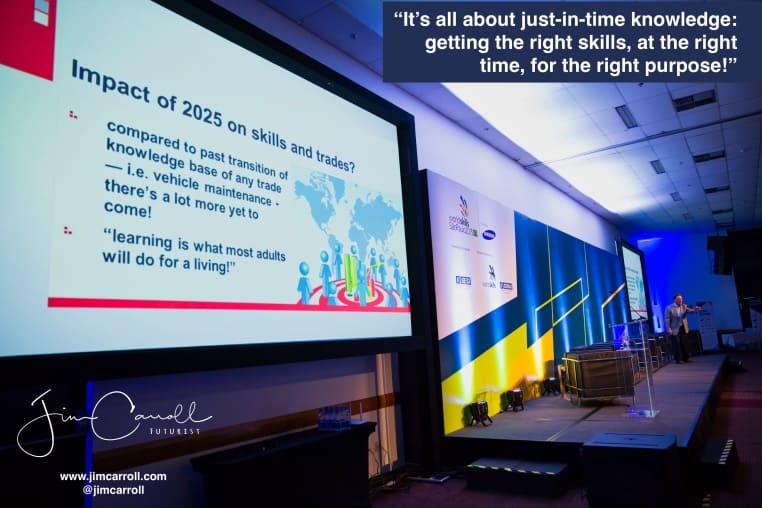