Daily Inspiration: “Your attitude should never be the cause of your defeat!”

“Your attitude should never be the cause of your defeat!” – Futurist Jim Carroll 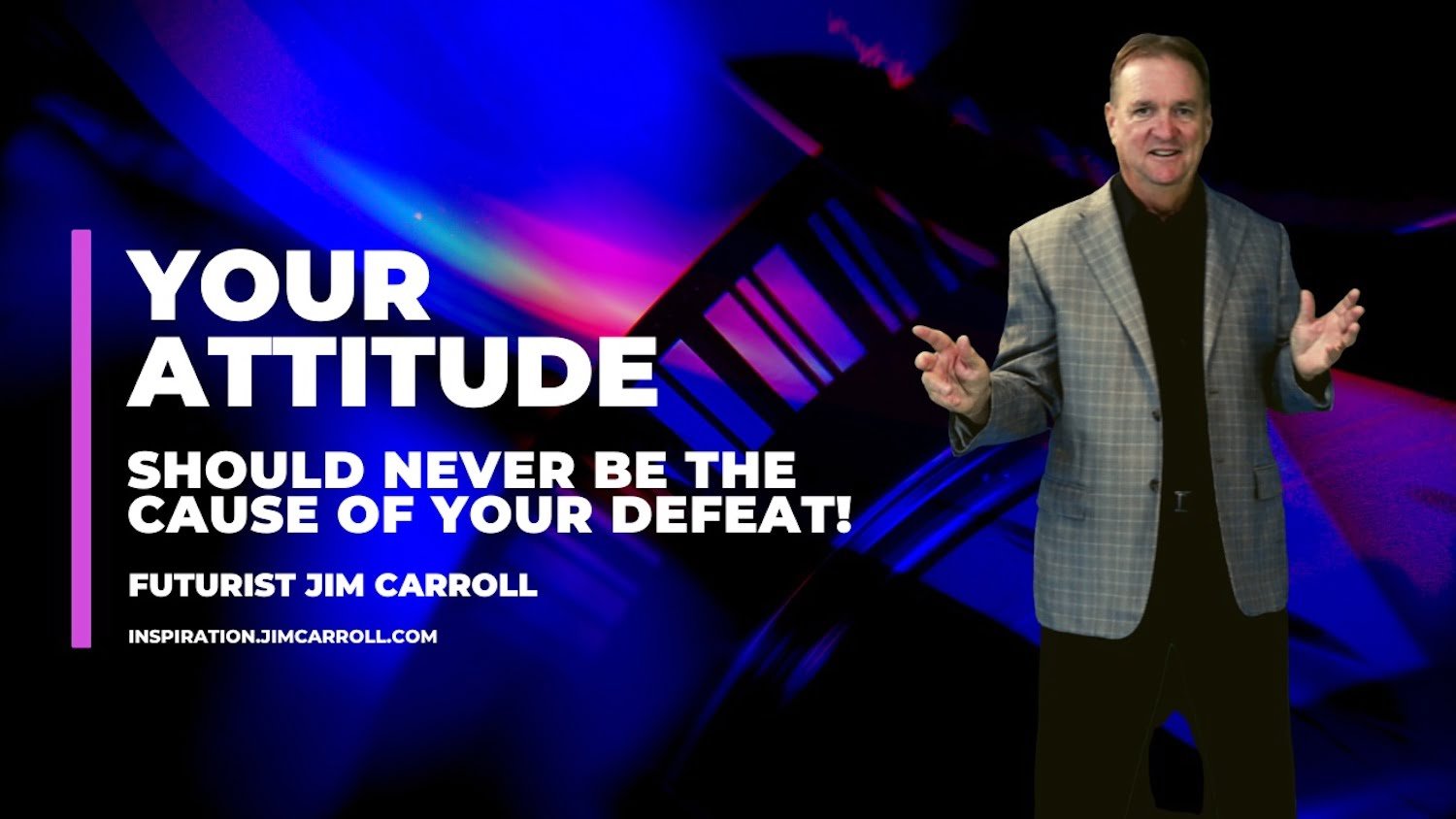 We often seem to be engineered to doom ourselves to failure because we set out with that idea in mind with many of the things we do! Wouldn’t we do a lot better if we didn’t start out that way?

Through the years, I’ve seen many innovation initiatives within organizations fail because the certainty of defeat seems to be top of mind at the very beginning; I’ve seen people do the same thing. Until I learned more about this and came to understand how to best manage that mindset, I was equally guilty, and I probably still am! Attitude is everything!

What happens? A few mindsets come into play – in organizations, a withering attitude of certain failure and a culture of defeat can settle into every new key initiative. I do a lot of research around innovation and factor the idea into many of my talks, and I’ve come to learn what goes wrong. I also listen carefully to what is being said by those I am working with, and so much of it is based on an attitude of defeat, with comments made to me that:

If you think about it, in these organizations, innovation initiatives become engines of excuses rather than factories of success!

I’ve witnessed this situation over and over again, and when it occurs in a staggeringly destructive manner, it is shocking, to say the least. Perhaps 15 years ago, I was booked by the newly formed ‘digital initiative’ team of a major global printing organization. In the business of managing dozens of highly sophisticated newspaper, magazine, and paper packaging printing plants, the Board, CEO, and senior leadership team knew that the key line of business was doomed, and that a significant shift was required.  To accomplish this, they established a ‘digital innovation team’ with the goal of finding a way forward.

The team invested a lot of time in their planning and efforts. When they engaged me to come in to give an opening keynote for a global leadership meeting they were organizing, we had a lot of discussions. And to me, they already sounded defeated at their very core in these early days The scuttlebutt among the team, stated in careful nuance, was that their effort would never succeed;! Surely the CEO would never be willing to fund the necessary investment and move with the urgency required!

And I will never forget the moments when just after my keynote for this kickoff meeting, and before they could introduce their plans, he basically said exactly that! Basically, he instead announced a company-wide ‘innovation challenge’ with a suggestion box as a way of moving forward! That was it – their ideas and plans were shelved in public view. I watched the team leaders around me; they seemed totally deflated – and rightfully so.  Today, I watch this organization from afar, and see that they are in the final stages of a failed struggle, never really adapting, and refusing to move at speed.

Failure was the only outcome because that was engineered as the only outcome from the start. (I have that moment in time on video and watch it every once in a while to remind myself as to how things should not be done. Since this is a publicly traded company I really can’t share it!)  What organizations need to succeed is a leader that will establish a mindset of certain success instead of an attitude of defeat. If you can’t do that, then don’t bother with the future!

From a personal level, pre-ordained failure also becomes a very real challenge. We can easily set ourselves up for failure because that is top of mind at the very start! There are a few ways around this conundrum:

So much of what happens when we set out to accomplish has to do with the mindset we establish at the start and the attitude that we adopt going in.

To sound totally goofy about this, I’ve taught myself a lot about the Linux operating system over the last 25 years – and I’ve done that with failure top of mind with every single project I do. Every time I try something new and need to discover new knowledge, I do so with the idea that I might actually ‘blow up my server.‘ I’ll do so many things wrong that things on my server will eventually just stop working, and become impossible or too infuriating to recover. And that’s the beauty of cloud computing – I simply press a button and reboot or reinstall the server from scratch and start again.

Voila – engineered success through an attitude of managed failure!

Think about that! If you recognize that attitude is everything, then you’ve got a fighting chance!