Daily Inspiration: “Successful leaders lift people up … rather than bringing them down!”

“Successful leaders lift people up … rather than bringing them down!” – Futurist Jim Carroll 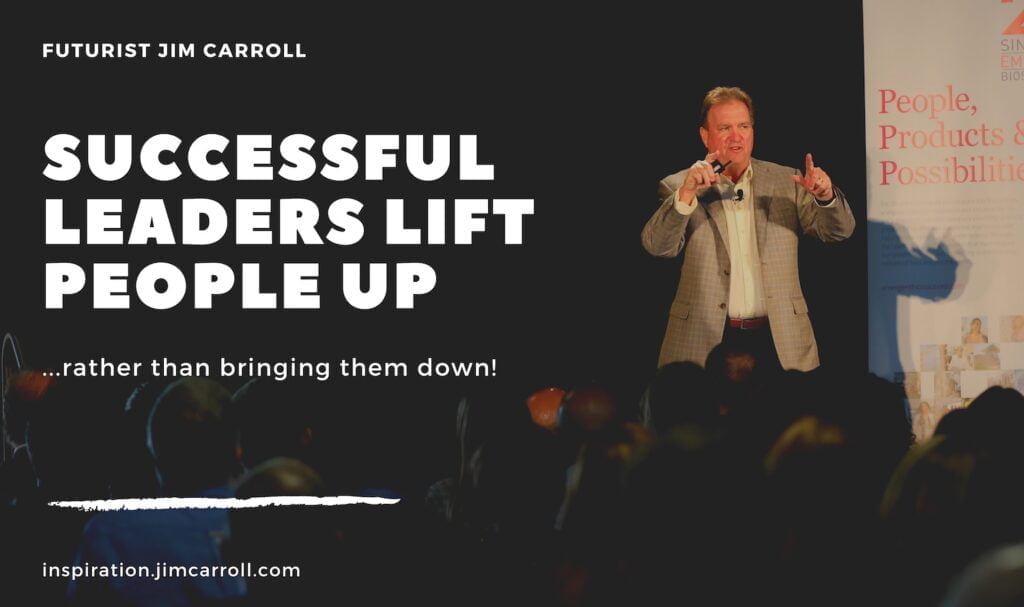 We all know that – but how do they actually do it? One of the most critical ways is by establishing hope, providing a sense of purpose, and instilling optimism in the team during volatile times. Leadership involves a myriad of skills, compelling levels of communication, a mindset for the opportunity, and the logistics of certainty. But they also do it by elevating people, helping them out of their funk, coaxing them out of their concern, ease them out of their anxiety. Giving a message that lifts them up rather than bringing them down.

Right now, that is uniquely important. Leaders who lift their teams up to the possibilities of opportunity, rather than just focusing on navigating through the challenges of complexity, end up with a more successful organization.

My front-row seat into their mindset tells me a lot about great leadership. And I was reminded of the importance of setting the tone when I was on a conference call yesterday with the CEO of a global organization; it was a planning call for a leadership session he was having with his team and the role I would play with my keynote. During the call, I was thinking that I love the clarity of a CEO’s mind. At one point early in the call, he stated how quickly they’re transitioning through fast-paced economic events.

Phase two is the reason why they are having this leadership meeting, which was being pulled together at the last minute in order to align to new strategic priorities. My role? I’ll provide them with an overview of key trends to think about; how I see other organizations dealing with fast-paced economic change, not to mention my fundamental insight on “innovating in the high-velocity economy.” The comments of this particular CEO certainly outline the stark reality of the speed of the global economic volatility that is with us post-Covid.

One thing became clear in the call – he wants everyone to be thinking about opportunity – not the constant barrage of scary headlines. He wants people to think about what’s next in terms of opportunity; not just what’s next with volatility. This echoes what I’ve been doing on stage as of late – the key theme being that it’s critical to focus on the future right now. Next week I’ll be in Switzerland with a global insurance organization – guess who! Here’s a key slide, where I will be speaking about what we learned during the global economic downturn of 2008 and beyond.

Winners grew at a 17% compound annual growth rate during the downturn compared to 0% among the ‘losers.’

In other words, leaders who focused their organization beyond volatility saw more success. Not only that, they solidified that win into the future:

Today, organizations that focus on innovation can act faster than they did in previous recessions. They’ve learned how to be more collaborative; they can share ideas and insight faster; they can react and re-react based on fast-paced trends. The result is that they can try out a variety of strategies to re-align their business for new realities.

So here’s what we know about the future as it looks this October 20202. Some organizations are going to come out of “this thing” quicker than most people think – where the leader has set the tone by lifting people up. Others won’t, because they’ve never set the right tone.

Be a great leader. Lift people up!