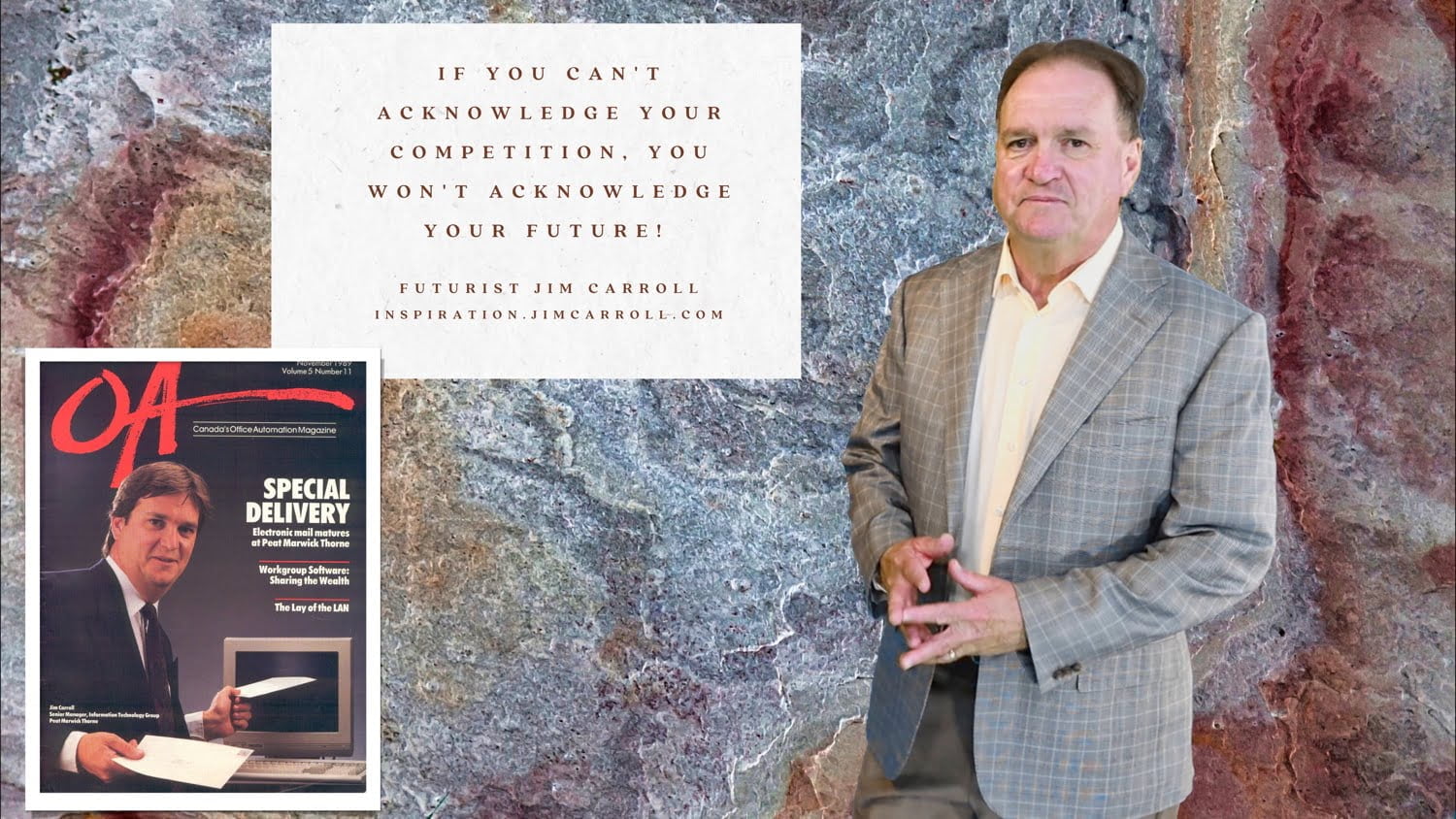 In 1989, I was almost fired from my job for a global professional services firm as the result of a magazine cover story about e-mail featuring me.

The other day, I noticed that my wife got rid of the mailbox at our front door – and with that, it’s the end of the era! 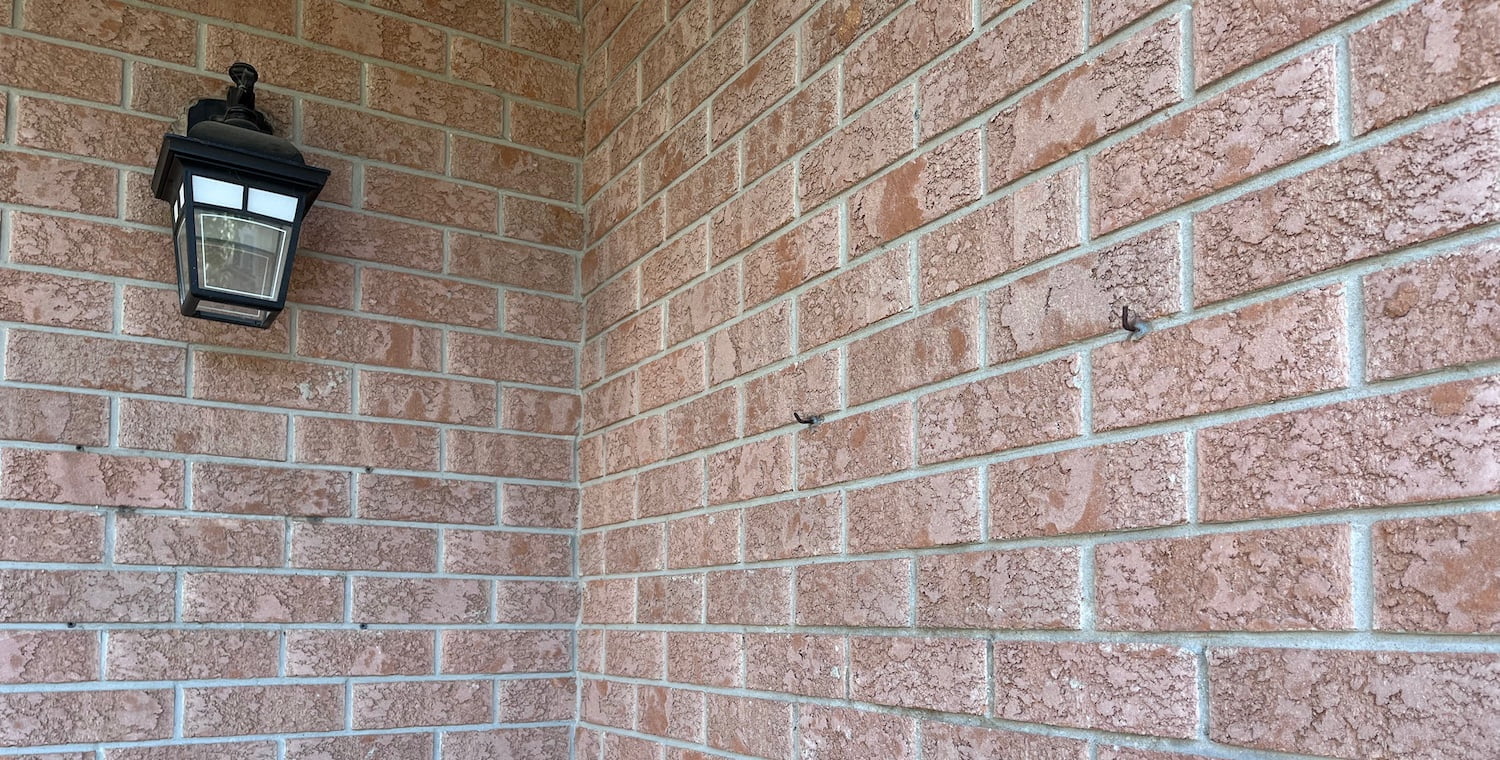 The two stories are essentially interlinked, 33 years apart, and I share them below.

TLDR? I wasn’t fired – but my prediction in the article from 1989 has obviously played out, a fact that was emphasized to me as the concept of regular mail delivery to my door long ago came to an end, rendering our mailbox as something from the olden days.

Back to the point of this story – over the years, I’ve noticed a tendency where many organizations and the executives who lead them don’t want to talk about, acknowledge or share insight on what their competition is doing, and that is often a fatal flaw in their ability to respond to their disruptive future.

It happened with Canada Post – in 1989, the CEO of the organization, which was a client, wanted me fired for the audacity of suggesting in a magazine article that email would one day replace most postal mail!

It also happens frequently with the keynotes that I do on stage. I will often share a slide deck in advance with my client, and inevitably, someone will come back insisting that various images and logos and examples referring to their competition need to come out – even when the competition is setting the pace for change within the industry! Why? I’ve never been quite sure!

But I’ve always seen this as a key issue – by refusing to acknowledge that the competition is setting the pace, the organization is doing itself a strategy disservice. I covered this in-depth in a post last year where I noted that the CEO of Volkswagen actually invited Elon Musk in to address his leadership team. 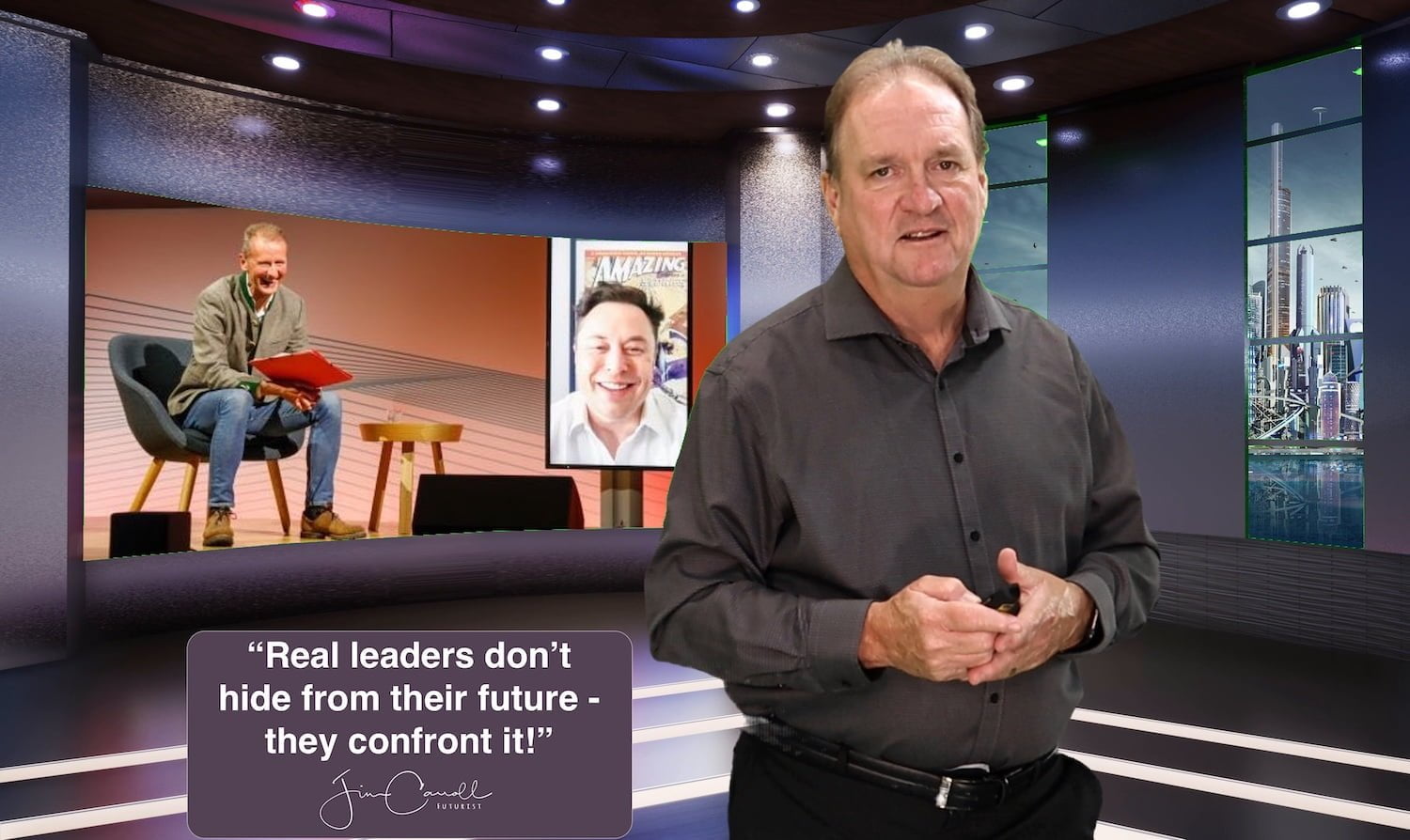 If you hadn’t seen the news story through the weekend, you should see it now. In a surprise move, Volkswagen AG CEO Herbert Diess invited Tesla CEO Elon Musk to address an internal global leadership meeting on a wide variety of issues, including the acceleration of electric vehicles, supply chain issues, the chip shortage, and more. With this move, Diess is now my new leadership hero! (Elon is pretty much up there too.)

Why is that? Because through his action of inviting in his fastest moving and most disruptive competitor, it’s pretty clear that he is trying to spur his team to directly confront the challenging future they face, rather than hiding away from it. And believe me, in doing so, he’s acting in direct contrast to so many similar CEO-level sessions I’ve participated in, in which the key seems goal seems to be to deny the reality of the future the competition represents rather than learn from their success. I would guess he understands that the internal combustion engine truly is from the olden days, that cars are rolling, upgradeable technology platforms on wheels, and that Volkswagon simply does have the compelling sense of urgency within its leadership team that is necessary to survive the transition.

Guess what – the CEO of Volkswagen has since been fired! So much for my hero! Was it for acknowledging the competition? Not really – but that was probably a factor in the overall actions that set the tone for his demise.

Back to the story about how I was almost fired – it was shared many years later in another article that appeared in Postal and Parcel Technology Magazine. They approached me to write an article about the future of mail in the era of technology, and particularly, e-mail.

My suggestion was that rather than looking forward, why not look to the past for valuable lessons?

Such as, how organizations seem to always react in a negative way to new technologies, new ideas, and innovation – and often refuse to accept that others are setting the pace for the future.

What better way to do so than by writing about the fact that I was almost fired in 1989 (yup, 28 years ago) because of a cover story that I was featured in about electronic mail? And the fact that some folks who had a vested interest in paper mail read the article, didn’t like it and complained. Kind of loudly. Because they didn’t like change.

The folks at Postal and Parcel loved the idea – and so we ran an article, below.

So what happened in 1989? I wasn’t fired. I ended up quitting the firm some months later, after 10 years, because the senior leadership team couldn’t comprehend my indications that something ‘big’ was happening. 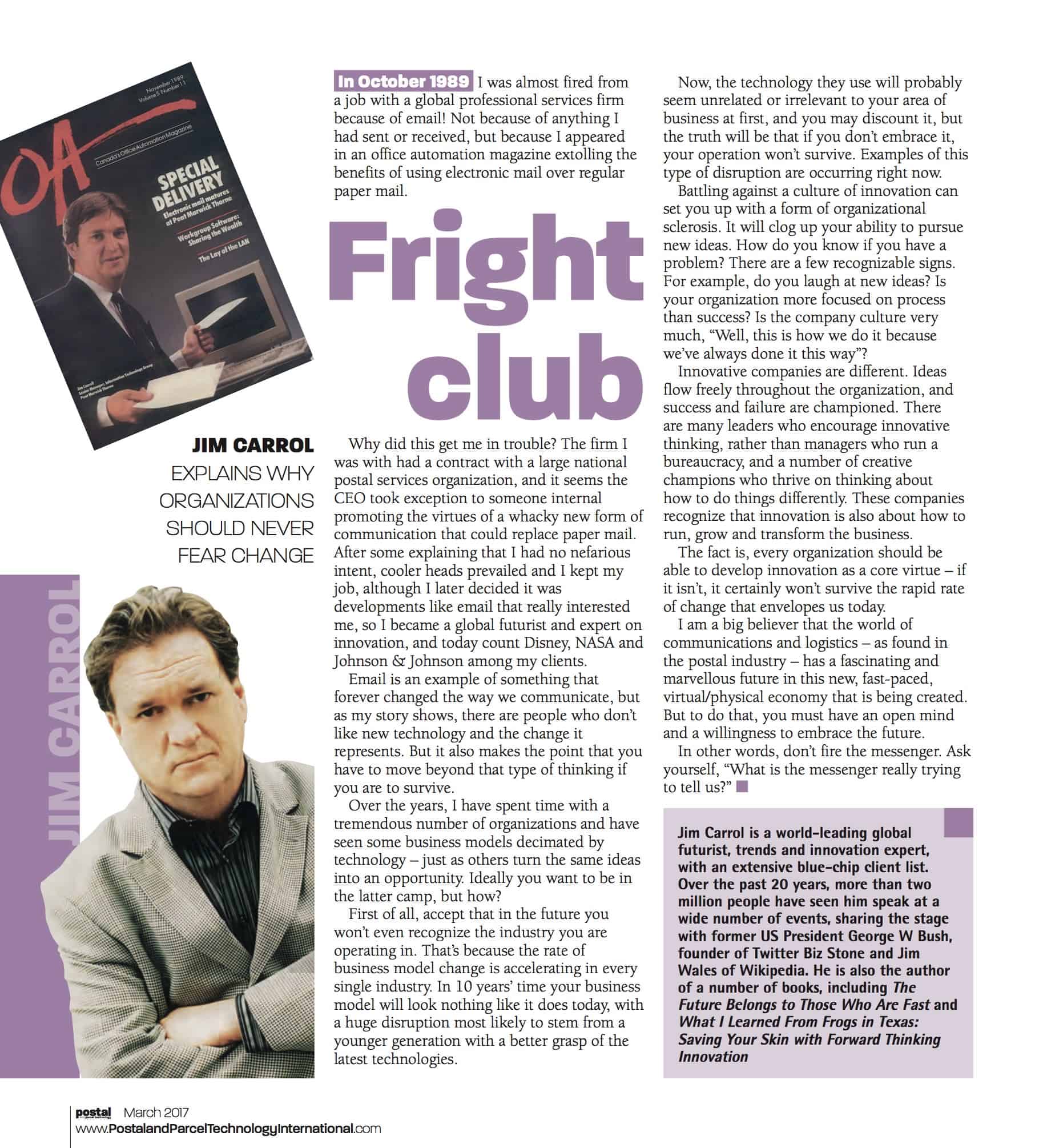 In October 1989 I was almost fired from a job with a global professional services firm because of email! Not because of anything I had sent or received, but because I appeared in an office automation magazine extolling the benefits of using electronic mail over regular paper mail.

Why did this get me in trouble? The firm I was with had a contract with a large national postal services organization, and it seems the CEO took exception to someone internal promoting the virtues of a whacky new form of communication that could replace paper mail. After some explaining that I had no nefarious intent, cooler heads prevailed and I kept my job, although I later decided it was developments like email that really interested me, so I became a global futurist and expert on innovation and today count Disney, NASA and Johnson & Johnson among my clients.

Email is an example of something that forever changed the way we communicate, but as my story shows, there are people who don’t like new technology and the change it represents. But it also makes the point that you have to move beyond that type of thinking if you are to survive.

Over the years, I have spent time with a tremendous number of organizations and have seen some business models decimated by technology – just as others turn the same ideas into an opportunity. Ideally, you want to be in the latter camp, but how?

First of all, accept that in the future you won’t even recognize the industry you are operating in. That’s because the rate of business model change is accelerating in every single industry. In 10 years’ time, your business model will look nothing like it does today, with a huge disruption most likely to stem from a younger generation with a better grasp of the latest technologies.

Now, the technology they use will probably seem unrelated or irrelevant to your area of business at first, and you may discount it, but the truth will be that if you don’t embrace it, your operation won’t survive. Examples of this type of disruption are occurring right now.

Battling against a culture of innovation can set you up with a form of organizational sclerosis. It will clog up your ability to pursue new ideas. How do you recognize if you have a problem? There are a few recognizable signs For example, do you laugh at new ideas? Is your organization more focused on process than success/ Is the company culture very much, “Well, this is how we do it because we’ve always done it this way?”

Innovative companies are different. Ideas flow freely throughout the organization, and success and failure are championed. There are many leaders who encourage innovative thinking, rather than managers who run a bureaucracy, and a number of creative champions who thrive on thinking about how to do things differently. These companies recognize that innovation is also about how to run, grow and transform the business.

The fact is, every organization should be able to develop innovation as a core virtue – if it isn’t, it certainly won’t survive the rapid rate of change that envelopes us today.

I am a big believer that the world of communications and logistics – as found in the postal industry – has a fascinating and marvelous future in this new, fast-paced, virtual/physical economy that is being created. But to do that, you must have an open mind and a willingness to embrace the future.

Want to read the original 1989 article? It’s here in this PDF! 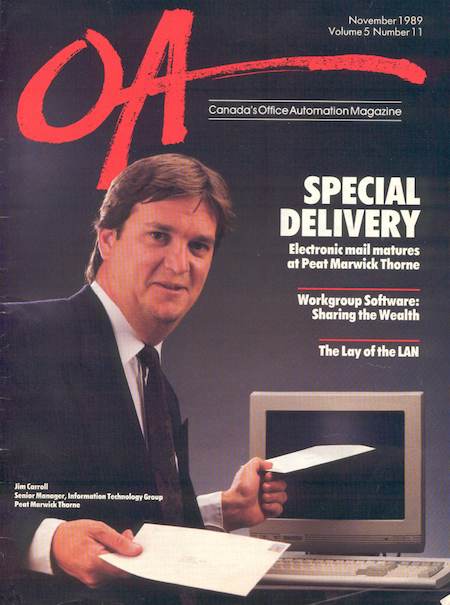 If. you do read the article, you’ll discover some magic from my past – in which I had decided to abandon my career as a Chartered Accountant (I am one still!) to focus on rolling out new technologies.

Do what you love – and you’ll love what you do!