Daily Inspiration: “History tells us that 10% of organizations become breakthrough performers during a recession – because they decide to double down on innovation and opportunity despite lingering and pervasive uncertainty!”

“History tells us that 10% of organizations become breakthrough performers during a recession – because they decide to double down on innovation and opportunity despite lingering and pervasive uncertainty!” – Futurist Jim Carroll 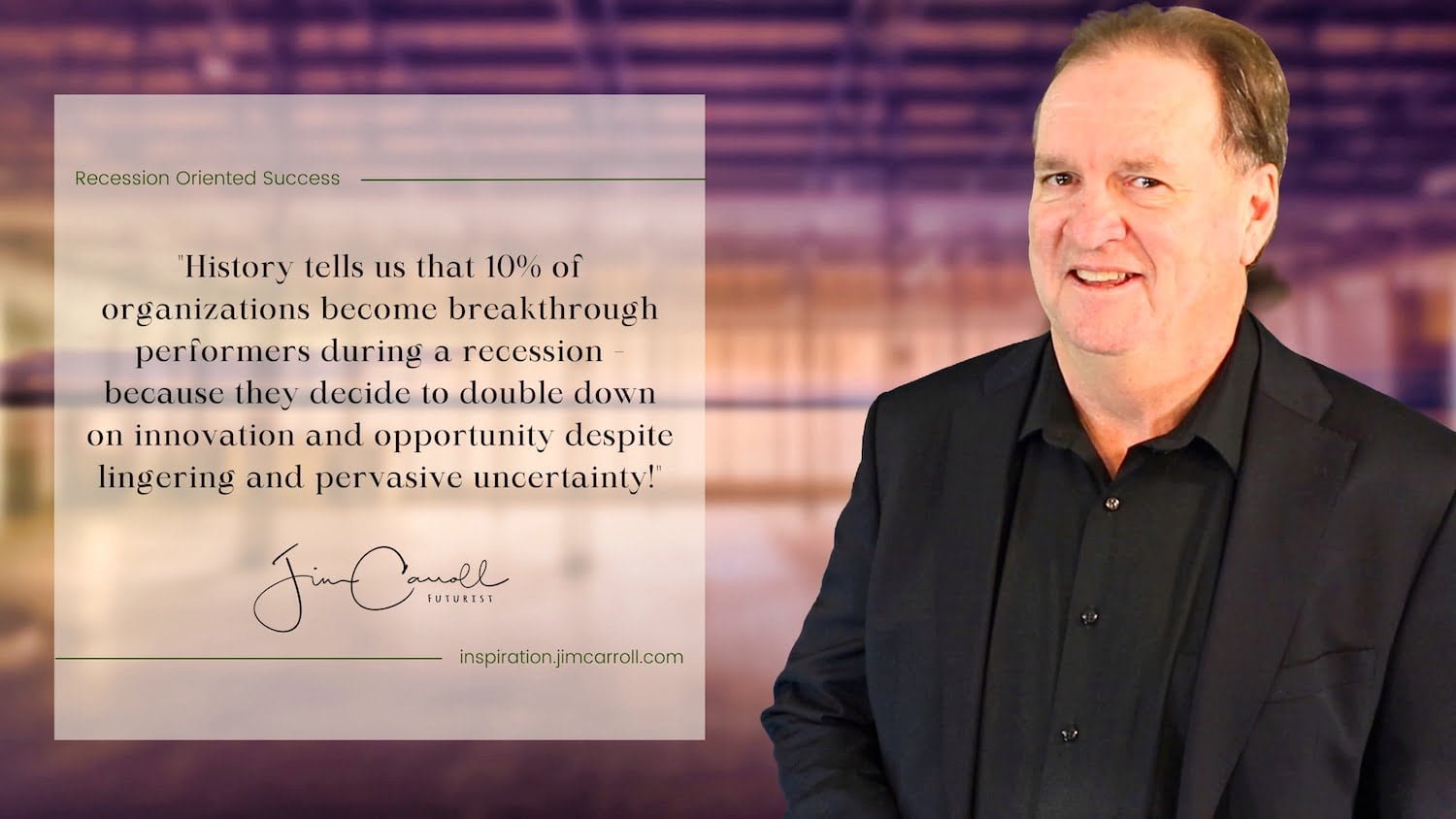 On this recession thing – how about those markets!

I guess it’s a good time to roll out a memo to the CEO! After all, as many senior executives began to panic and make rash moves, it’s important that they don’t lose sight of what history has taught us – right now, when things are uncertain, volatile, and unpredictable, is the best time to double down on opportunity.

Why is that? Here’s a key observation I dug out from some research by the head of innovation at GE some years back, when he studied how organizations performed in a period of economic decline:

He has researched four U.S. slowdowns of the last half century: the oil shocks of the early 1970s, the crippling unemployment of the early 1980s, the recession of the early 1990s and the dotcom bust of 2000. “In each period, about 60 per cent of companies barely survived, while 30 per cent died. But the remaining ten per cent or so actually became breakthrough performers and that’s mostly because of the choices they made during the recession period.”

The keyword there is choice. The choice that you need to make right now is to focus on growth, particularly, growth through innovation.

The same thing proved to be true with the great economic downturn of 2008-2009 – some of the biggest disruptive innovations of our time were born in the ashes of the economic ruin of that era. Uber, Airbnb, and Tesla – all emerged or saw dramatic growth during one of the worst recessions of our time.

Recessions and economic volatility are opportunities – we know that through history! With that in mind, send this memo to your CEO. He or she needs to read it right now! 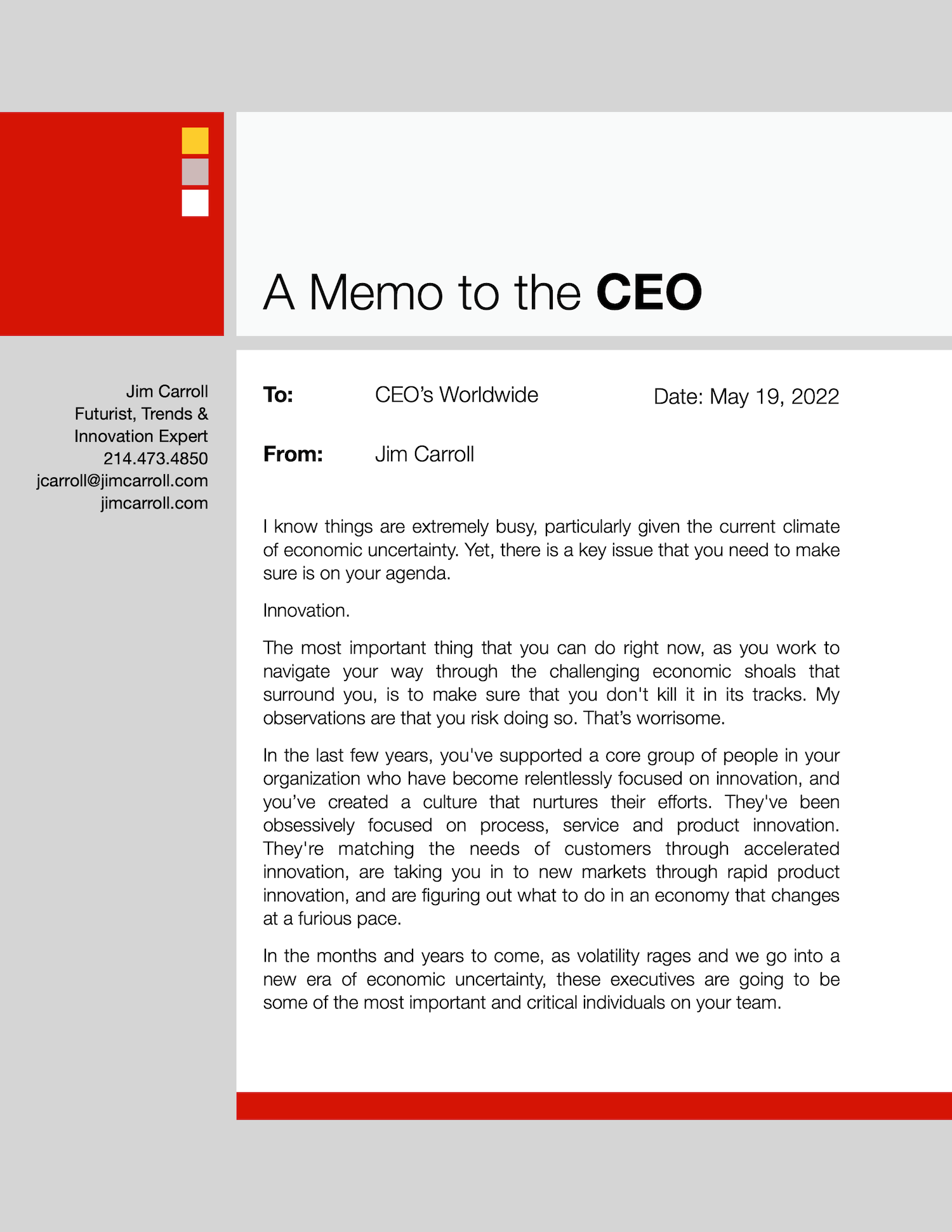 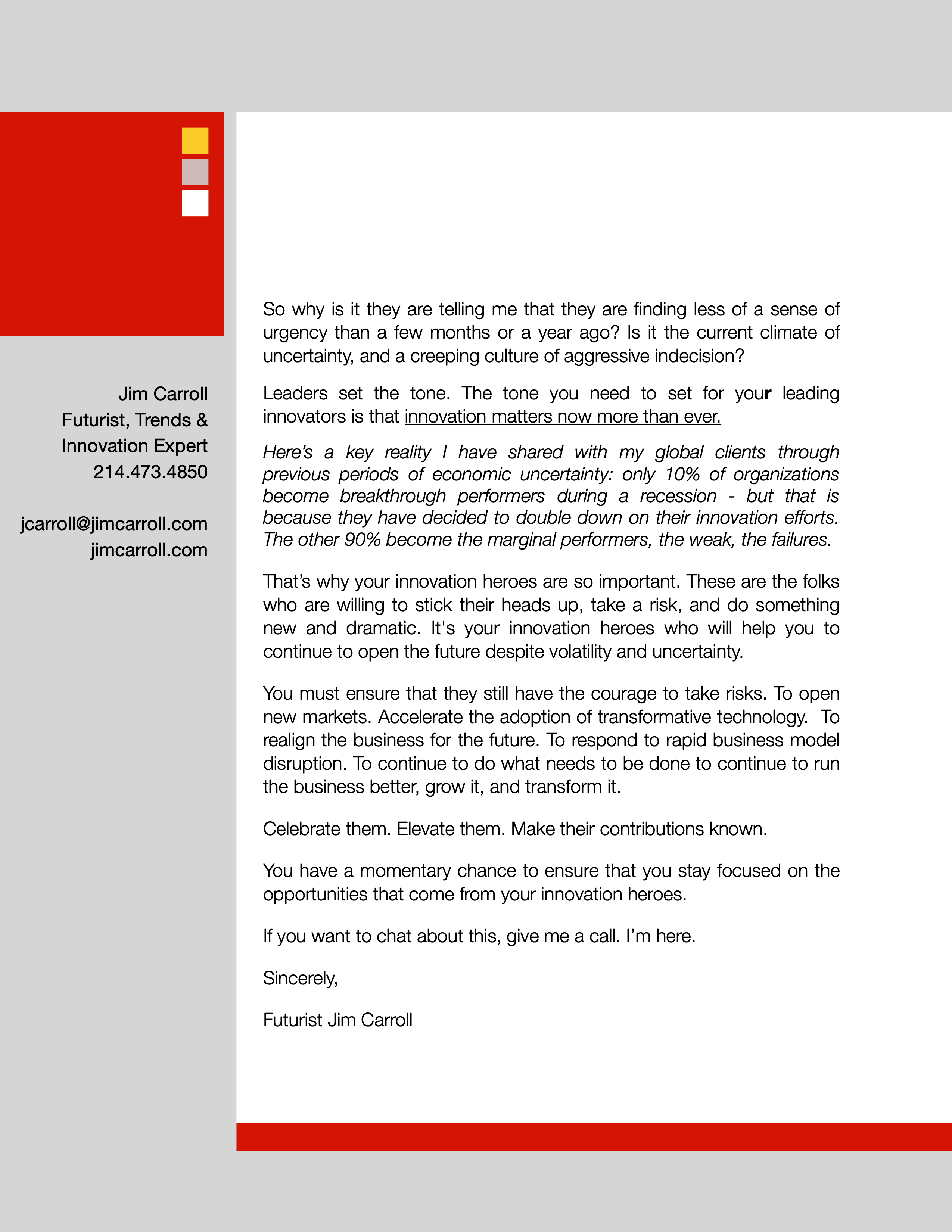 I know things are extremely busy, particularly given the current climate of economic uncertainty. Yet, there is a key issue that you need to make sure is on your agenda.<

The most important thing that you can do right now, as you work to navigate your way through the challenging economic shoals that surround you, is to make sure that you don’t kill it in its tracks. My observations are that you risk doing so. That’s worrisome.

In the months and years to come, as volatility rages and we go into a new era of economic uncertainty, these executives are going to be some of the most important and critical individuals on your team.

So why is it they are telling me that they are finding less of a sense of urgency than a few months or a year ago? Is it the current climate of uncertainty, and a creeping culture of aggressive indecision?

Leaders set the tone. The tone you need to set for your leading innovators is that innovation matters now more than ever.

Here’s a key reality I have shared with my global clients through previous periods of economic uncertainty: only 10% of organizations become breakthrough performers during a recession – but that is because they have decided to double down on their innovation efforts. The other 90% become the marginal performers, the weak, the failures.

You must ensure that they still have the courage to take risks. To open new markets. Accelerate the adoption of transformative technology.  To realign the business for the future. To respond to rapid business model disruption. To continue to do what needs to be done to continue to run the business better, grow it, and transform it.

Celebrate them. Elevate them. Make their contributions known.

You have a momentary chance to ensure that you stay focused on the opportunities that come from your innovation heroes.

If you want to chat about this, give me a call. I’m here.