Headlines: My Tesla Life 5 Months In: They Own The Future – But Have a Long Fast Way to Go with One Aspect of It!

Just under five months ago, I picked up my Tesla Model 3. It was an exciting moment – I’d been speaking and writing about the disruptive impact the company has been having on the auto industry since 2010. Further back, I actually predicted parts of its business model way back in 2003 while speaking at a leadership meeting for DaimlerChrysler in Stuttgart, Germany.

Since then, I’ve had the opportunity to experience many different aspects of what it means to own an ‘electric, hi-tech rolling technology battery platform on wheels,’ as I often describe a Tesla vehicle on stage. I decided to roll this into a video from my virtual broadcast studio that gives a ranking to the many different aspects of what constitutes a vehicle in the 21st century: electric/battery, self-driving, charging infrastructure, technology platform, upgradability, and more.

Here’s what I’ve learned, ranking a full set of features in the video as to where they are on the Gartner Hypecyle which I will often use to judge the maturity of technology or timing of a trend:

For almost all the features with Tesla and the infrastructure around it, I rank it as being on the “Plateau of Productivity” except for one feature, discussed below. They certainly do own the future, and it is going to be difficult for mainstream car companies to catch up. (But I’ve been saying this consistently for well over a decade now!)

On the other hand, I did invest heavily to migrate an electric car life. We had to upgrade the panel at our new home, and run wires to our garage as well as our chalet – I figure all in, we spent about $8,000. The panel upgrade had to happen regardless, so let’s say I spent about $5,000 to support the car. Based on the electricity cost, all my driving from this point will essentially be close to zero.

So it’s all a plus …. except for one big missing piece – full-self-driving technology, or FSD as it has become known in the Tesla community, is just not there. I didn’t expect it to be – but my opinion on when it will actually be here has become more pessimistic. Like many folks, I ponied up and paid the additional money for the feature – knowing that it was still very much in development.

But my conclusion to this point in time is that I’ve essentially paid money to be a part of a beta test that is still very much in its very early stage. Elon Musk talks of the inevitable of FSD, but it is nowhere near mature, albeit while being extremely impressive at the same time. Perhaps this is my location – the feature is limited in Canada to highway use only, while only a small subset of drivers in the US have been granted access to the latest iteration of FSD – receiving regular software updates, as well as the loss of beta-privileges if they show aggressive driving behavior. My opinion is further clouded by my use of the basic Autopilot feature – which is a free feature on all Tesla’s – which is found in a number of other vehicles. It continues to suffer from a number of flaws, most obviously what is known as “phantom braking.” I’ve had multiple instances of driving the car under Autopilot when a truck approaches from the other direction in the other lane – and the car decides to violently apply the brakes, beep, and slow down. Very unnerving. And it’s a common problem:

So that’s a negative. But how fast will they get there? I’m of mixed feelings – watching this unfold in real-time as new software releases occur makes me appreciate that we certainly cannot use old models of innovation to judge the pace of change that is occurring here. To judge that, I follow an esoteric fellow on Twitter who carries the handle “WholeMarsBlog” – and this particular post caught my attention. 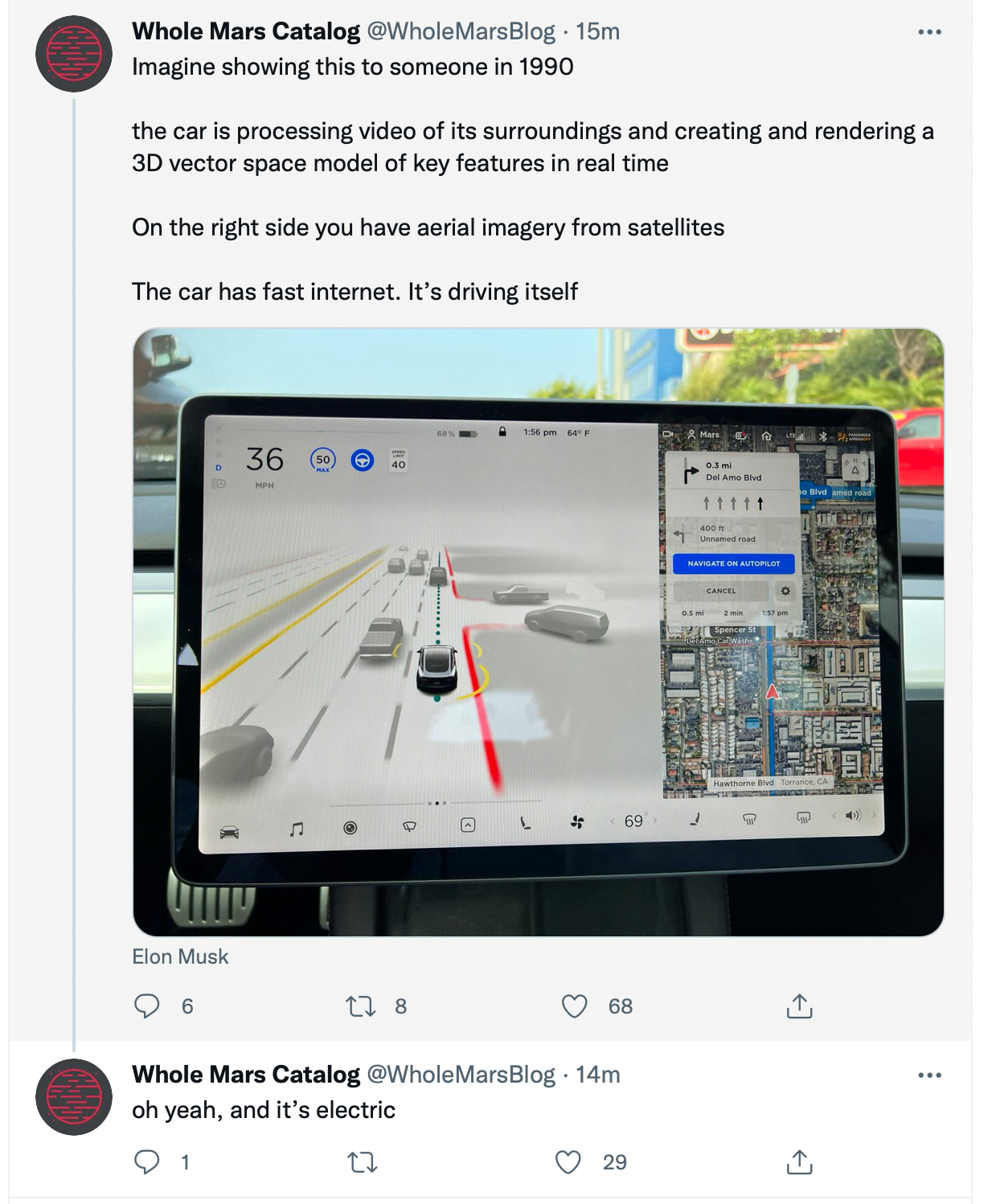 I have learned that the Tesla community is rabidly fanatical about the car and infrastructure – I have become that way too. Many will dispute my opinion, but such is a world of leading-edge technology – there are rabid fans, raging skeptics, and the rest of the folks, like me – big fans, but cautiously skeptical of some aspects of what we have.