Home   >   Auto & Transportation   >   Daily Inspiration: “There’s a battle underway for the future – and it’s pretty clear that one side doesn’t know how to put up much of a fight!”

Daily Inspiration: “There’s a battle underway for the future – and it’s pretty clear that one side doesn’t know how to put up much of a fight!”

“There’s a battle underway for the future – and it’s pretty clear that one side doesn’t know how to put up much of a fight!”– Futurist Jim Carroll 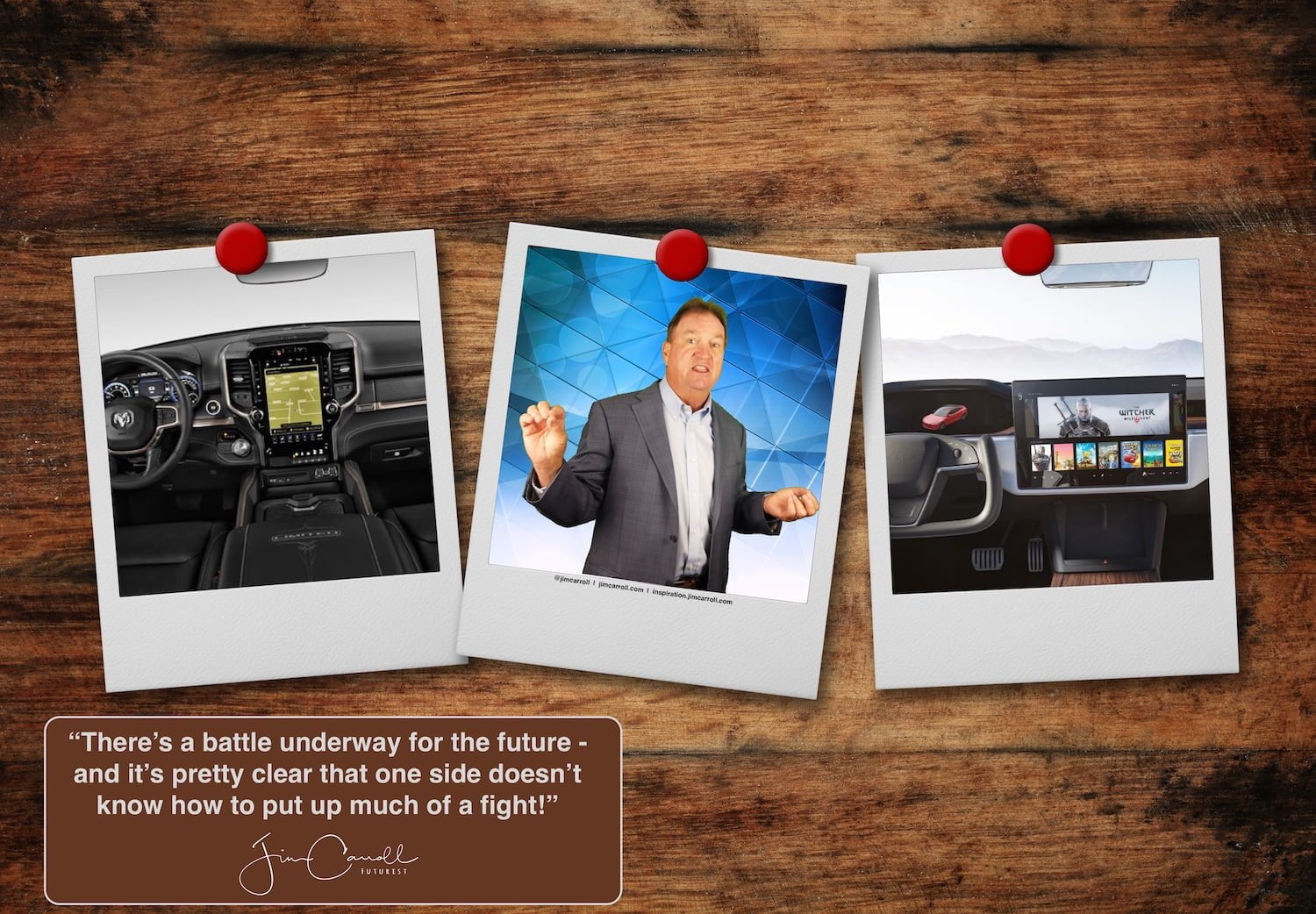 The fact of the matter is that there’s a war underway for the dashboard of your car – and hence the entire future of the automotive industry – and legacy automotive companies are losing. The sad thing is, it would seem that many of them are only beginning to acknowledge they are in a battle, refuse to acknowledge that they are ill-equipped to fight, and that don’t seem prepared to fully abandon their hubris and complacency in order to take it on to full effect.

The thing is, they actually lost a decade ago. The result is that their potential to come back is significantly hampered – GM could be the next BlackBerry. VW the next Motorola, Ford the next Nokia, Toyota the next Palm Pilot.

Don’t believe me? Go back and read the post I put up in 2013 about the future of the industry. This came about a decade after I came up with the idea while at a meeting at DaimlerChrysler in Germany that a tech company might one day own the future of the automotive industry.

Trend: The Future of the Automobile and Automotive Retail

This dynamic is playing out in many industries today as the speed of innovation shifts to that of Silicon Valley, and as faster, more nimble companies weaned on technology define the future.

It’s often not a fair fight.

In your industry – are you prepared to fight it? Read what I wrote in 2013!

The most significant change to the auto industry is already well underway, and is easily summarized by one of the slides from my deck: 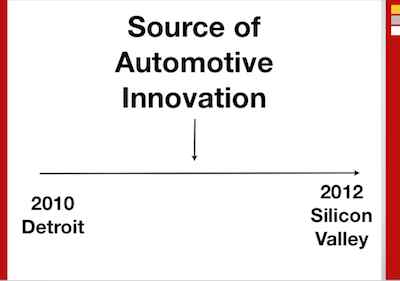 Quite simply, the pace, control, and speed of innovation is shifting from auto companies in Detroit (and elsewhere) to the technology companies of Silicon Valley. This was the focus of an article run in an industry publication before my talk, Detroit isn’t keeping pace with innovation, says futurist Jim Carroll.

“Shifting customer expectations are driving part of that change as drivers will now expect their vehicles to be as advanced, easy to use, and even as “replaceable” as their smartphones and tablet devices that are so central to their lives.

He says dealers need to ensure their staff is ready to adapt to the change. “A car you sell today might be out of date two years from now,” he says. “How do you keep your salesforce and service force up to date with that speed of change?”

“Some people see a trend and see a threat. Real innovative people see the same trend and they see opportunity. That’s what dealers need to ensure they do when they think about this very fast-paced future,” says Carroll.

Mobile will also forever change the retail experience and dealers will need to adjust to provide better customer experiences. “I will talk about the changes going on in retail,” says Carroll. “Mobile is the big story.”

He says social media and mobile shopping are having a huge impact on purchasing decisions. “There is a lot of technology that is coming that will link to mobile.” These new technologies will forever change the customer interaction with retailers. “It’s happening very, very quickly,” says Carroll.

In my keynote, I played into this theme. To start out, I asked the audience how many people in the audience used all the features of their new “Smart TVs.” Very few hands went up.

Why? Because many people are coming to the conclusion that most smart TVs are actually pretty dumb! What we’ve seen in the last several years, with most so-called smart TV’s, is a situation in which television manufacturers, who have never been really part of the Silicon Valley technology and design culture, suddenly began throwing all kinds of features onto televisions, such as Facebook, Twitter, Netflix.

The result is if you pardon the expression, a real barf-bag of clumsy screen navigation, confusing remotes, ill-designed apps, and, well, just a bit of a major FAIL.

Smart TVs? No one uses smart TVs because they’re dumb. And that seems to be a message that is resonating on the Internet; such as this article recently featured on Wired.

Contrast the Smart TV experience to the Apple TV. The latter has a crisp design, clean, simple, and intuitive interface. Quite simply, it just works.

Now think about the new car that you might own. It’s got a new, cool GPS navigation system. Perhaps an interface to your iPhone. Some entertainment options. And most likely, it’s probably clunky as heck. Slow. Cumbersome to use. Just difficult to navigate. Noted the New York Times in an article in June 2012: “‘See, you spin this knob here, which moves you through these selections up here. Then you press down on the knob to select something, but don’t forget about the other menus under this button…”

And that is where we are in the auto industry today: we have a lot of car companies working to try to figure out how to make technology work. And the fact is, in a world in which the future belongs to those who are fast, they are having a difficult time doing so. They don’t get a great, clean design. And they have horrifically long development lead times: PCMagazine observed that “a 2012 car could have a system originally designed in 2006 and put into production in 2008 when that model first hit the streets.”

Maybe what is happening is that car companies are making the same mistakes that TV companies made. They’re making a lot of cars with a lot of cool technology that few people will use, because, well, the interface and design suck!

Contrast any auto company and their dashboard experience to that of Tesla Motors, the “Silicon Valley” car company! This is a technology company that is figuring out how to make cars, a completely different paradigm. And most people would conclude that they’ve nailed the part of the in-car design. The reviews of the in-car dash, with its crisp 17″ screen, show a passion and delight within the customer base. It’s like the Mac or OS/X design for automobiles!

Tesla isn’t a car company. It’s a tech company, headquartered in a hive of innovation that helped lure the sharp minds who conceptualized the car from an outsider’s perspective……If Tesla is a technology company, the evidence starts with the car’s innovative infotainment system. The 17-inch touch screen controls nearly everything — including navigation, stereo, climate control, and driving settings. As clear and touch-sensitive as an Apple iPad, the huge screen can easily accommodate multiple functions at once.
Although Tesla’s future remains uncertain, its Model S delivers on the firm’s grand ambitions, 9 February 2013, Los Angeles Times

Think forward to how quickly technology and automobiles are going to evolve, particularly with autonomous driving technology. Who will win at this race? Google or Ford? Apple or GM?

I think my answer is probably pretty clear!