Daily Inspiration: “Many companies fail at the future because they haven’t been listening to what the future has been telling them.”

“Many companies fail at the future because they haven’t been listening to what the future has been telling them.” – Futurist Jim Carroll 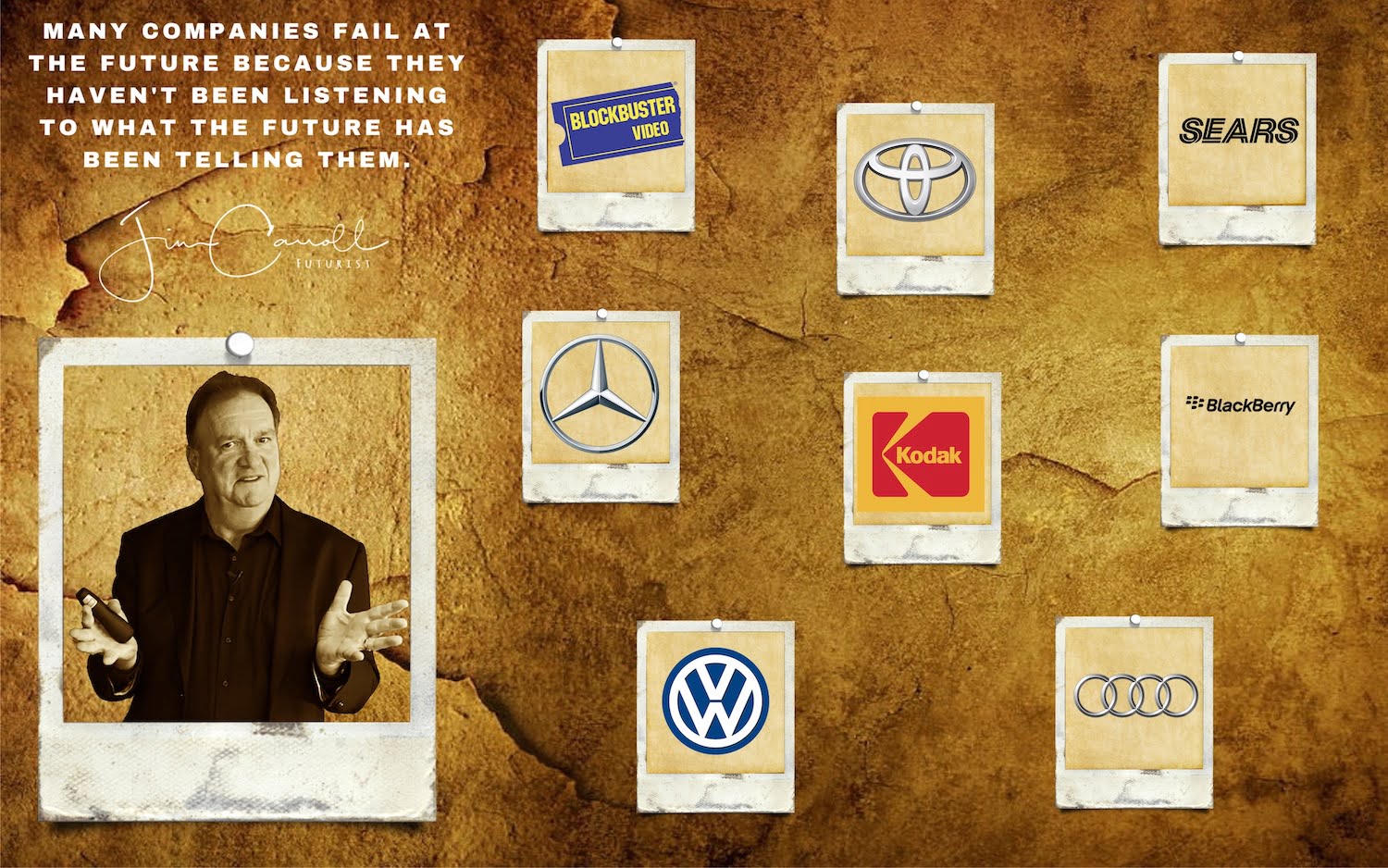 In many industries, we know exactly how the future is going to unfold. And yet many simply don’t listen or refuse to acknowledge the reality and inevitability of the trends which are underway. The result is that over time, many market leaders become market losers, eventually becoming fading into the era of irrelevance.

A great example is unfolding right now. It seems that just like a year or two, most people were dismissing the idea that electric cars would dominate our future, and that technology would dictate the pace of innovation within the industry. There were many excuses – range anxiety, immature battery technology, an ongoing preference for gasoline and diesel engines. In my mind, excuses are simply a manner of avoiding the inevitability of trends.

I certainly spent a lot of time immersed in this aspect of the transportation industry over the last 20 years, with dozens of talks in and around every aspect of the industry – https://automotive.jimcarroll.com. One of my last in-person keynotes was for the American Truck Dealers Association in Las Vegas at the massive National Automotive Dealers Association annual conference – and I know that many in the audience would have loudly dismissed the idea of electric trucks if given the chance. And I know in many other events, my observations on the future of the industry were dismissed, ignored, or in many cases, laughed at.

And yet here we are, just a few years on, and it’s pretty clear that the direction of the industry has dramatically changed forever. The era of ICE vehicles is over – and you can’t go a week without another announcement by one of the major companies as to their plans to enter the world of EVs – full on. Even Toyota, which until recently has loudly dismissed the idea of electric vehicles, has jumped on board with a full list of what I’ve come to call ‘vapor vehicles.’ (i.e. is it just PR or reality?)

Will legacy companies successfully make the transition? In my mind, the jury is still out – because their denial of inevitability has cost them dearly. As I noted in a series of tweets yesterday, Ford CEO Jim Farley seems most willing to accept the reality of their future, even going so far as to invite Elon Musk to address his leadership team, acknowledging the company as the pacesetter. And yet, he has a massive ship to steer and a dramatic direction to realign to. He needs to readjust his skills and manufacturing base; line up massive quantities of unattainable technology (i.e. batteries), accelerate his R&D capabilities to the world of technology, and bring his dealer network onside, among many other challenges.

The latter issue might be the most difficult, but put them all together, and it’s a tough mountain to climb.

The whole situation very much reminds me of the scrambling that Research & Motion had to do once they accepted the reality that the iPhone, and not the Blackberry, was defining the future of the smartphone industry. Too little, too late goes the phrase! We’ve seen it before and we’ll see it again.

And the key thing is this – it’s not like the future hasn’t been telling everyone about the inevitability of what comes next. In every industry, we know where we are going – it’s often just the timing that is unclear. That’s why it’s critical to always follow my mantra – when it comes to the inevitability of the future, think big, start small and be prepared to scale fast!

Because otherwise, – it’s when you are scrambling to align to the future, you are probably already falling into the abyss of disruptive failure, joining a long list of those who weren’t listening.