Daily Inspiration“Every great idea was once a dumb idea!”

“Every great idea was once a dumb idea!” – Futurist Jim Carroll 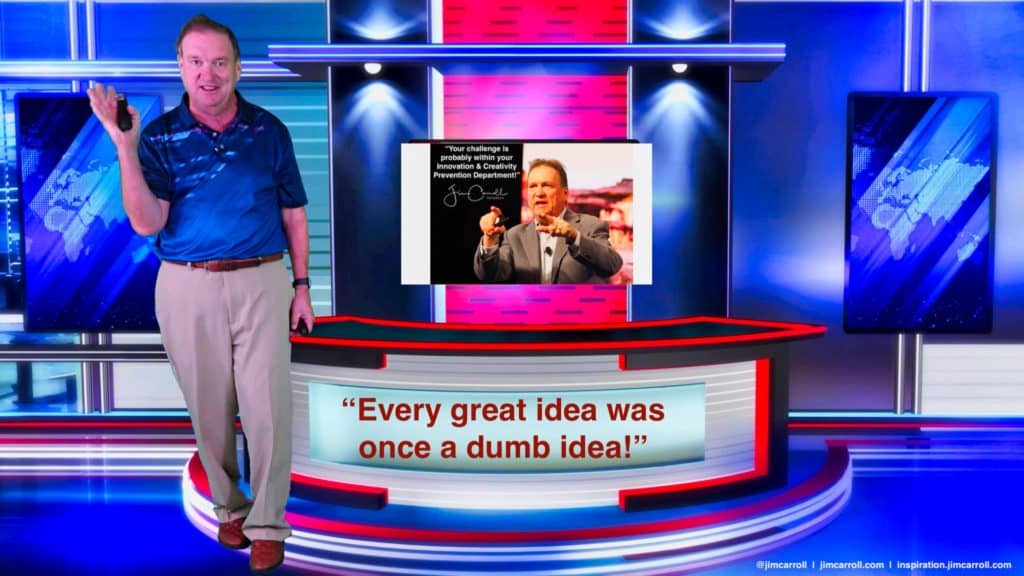 History is littered with the legacy of great ideas which were initially presumed to be dumb ideas. It happens all the time.

Famously, the founder of FedEx, was told that his university project suggesting a local and international parcel delivery service was a dumb idea.  Joining the club in the rejection department were the founders of Snapchat and AirBnb. Hewlett Packard turned down Steve Jobs and Steve Wozniak four times before they went off to build Apple Computer on their own, because it was a dumb idea.

The Beatles? The dumbest idea of all time, according to the record executives who originally turned them down – because ‘boy bands’ were on their way out!

If someone tells you that something is a bad idea – it’s probably a great idea!

That’s because history has taught us one simple fact – the best ideas often look initially like bad ideas!

I was in the virtual home broadcast studio yesterday, filming a clip around the “innovation killers”, and this particularly issue came up during the preparation of my set.

In my own career, I had lots of ideas which were ‘dumb’ ideas. Case in point – In 1986, I suggested a project I called “Linkage” – the idea was to create a collaborative network based on personal computers within the global professional services firm in which I worked. We could build out the capability worldwide, by allowing our staff of tens of thousands to have an ‘online resume.’ Everyone would be able to publish their own ‘page of information’ that detailed the projects they had worked on and the unique skills they possess. We could utilize email and a sort of ‘chat’ feature by which people could build fast new teams of expertise based upon this new skill discovery tool.

It was rejected as a particular dumb idea. Years later, LinkedIn was launched into the world, and featured pretty much the same feature set.

If someone tells you your idea is a dumb idea, know this simple fact – it’s probably a fantastic idea!