.
Home   >   Covid-19 & Moving Forward   >   Daily Inspiration: “Don’t be average, just like everyone else. Strive to be better, to be your own extraordinary self!”

Daily Inspiration: “Don’t be average, just like everyone else. Strive to be better, to be your own extraordinary self!”

“Don’t be average, just like everyone else. Strive to be better, to be your own extraordinary self!” – Futurist Jim Carroll 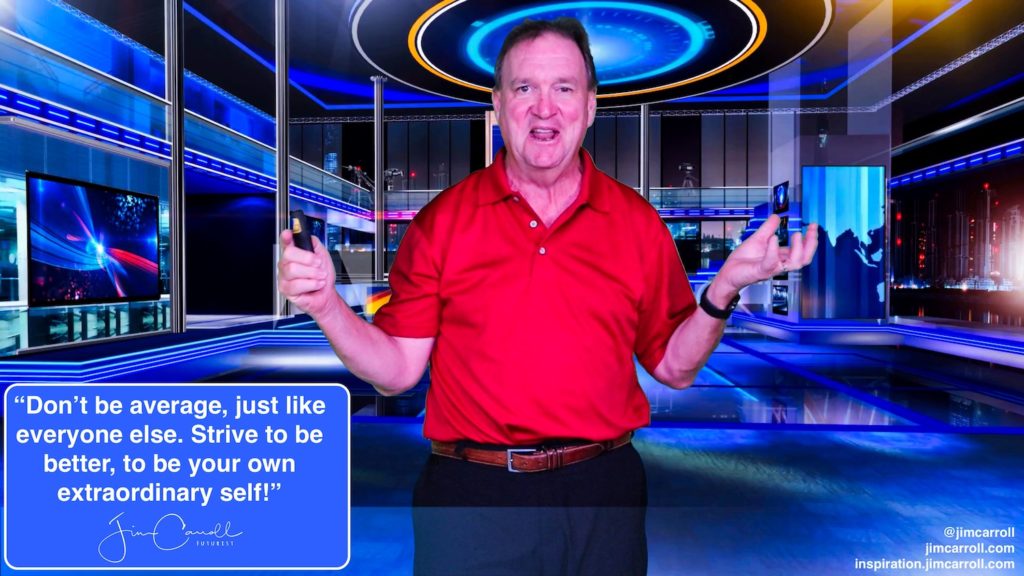 It’s pretty amazing what you can do in your basement when you think about it – I had two confirmed bookings yesterday for virtual presentations in the fall! The list is beginning to grow.

My future is working.

Four months ago, my business imploded, my future was gone, and fear drove my agenda. My outlook was bleak.

That moping, miserable meandering in my mind lasted about a day…..

I decided right away that this ‘thing’ was going to be around for a long time, and that I might as well build a new business that had me doing what I did except from my home. So I took a look around, and quickly learned that most other speakers were simply ‘zooming it in’ – delivering flat, lifeless content from their office, devoid of imagination, deadly in tone, uninspiring in their message.

I decided I was NOT going to do that. I was going to do it better than anyone else. I would build a product that people would want, that would command attention, and that would be recognized for what it is worth.

And so I set out on my broadcast voyage.

Success, when it comes, is sweet. Looking around today, I KNOW that I’m miles ahead of what any other topic expert is doing in this new and virtual world. To be blunt, there is a LOT of shitty content out there. The meeting and events industry and speakers bureaus are actively committing hari-kari by pushing a low-quality product out to a market that is wary, tentative, fearful. They are operating in fear, are driven by panic, and act without the imaginative push that comes from asking the question, “what if we could do it better?”

My every waking day is now driven by the thought, ‘what if I could do it better?’ I challenge myself at that with my morning round of golf, and then do it again in the home broadcast studio by continuing to learn, design and build.

To this point? I KNOW I’ve got a killer product – I don’t mind boasting – and the instinct of a hunter in closing a deal. Gosh darn, it’s fun! Yesterday, a potential client asked me if I could do something virtual. Instead of typing an email response, I went down to the studio, fired up a storyline set, filmed them a two minute clip, showed them what they could do – and closed the deal an hour later.

Like I said – you can wait for the future to happen, or you can make the future happen!