Home   >   Uncategorized   >   Daily Inspiration: “We are now firmly placed in the era of ‘aspirational science….'”

Daily Inspiration: “We are now firmly placed in the era of ‘aspirational science….'”

“We are now firmly placed in the era of ‘aspirational science.’ People who want science to tell them something they want to hear, not what science is actually telling them!” – Futurist Jim Carroll 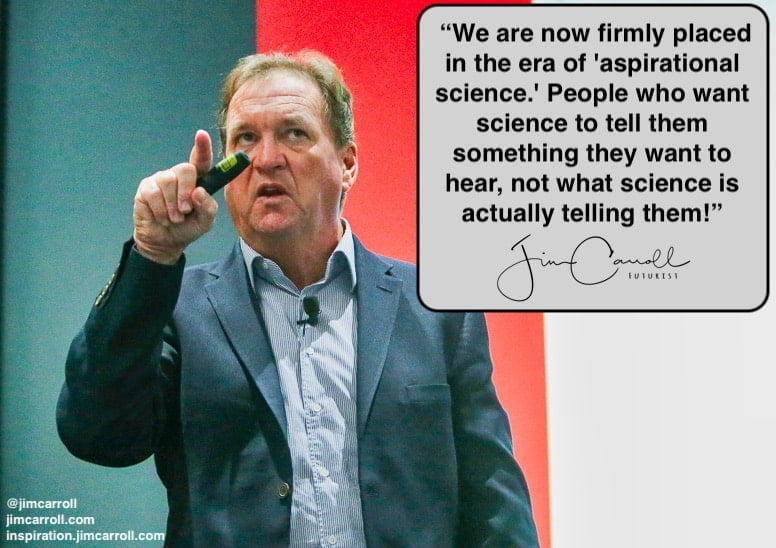 I try not to engage in the many battles of social media – there is often no upside, just a race to the bottom of the ugliness of human behaviour. And so I will remind myself that I can should not bother to argue the things that I know are right, the courage to not engage with little hope of rational thinking, and the wisdom to know when to withdraw.

That caught my attention!

Moments later, someone posted that misleading video from two California doctors about the lockdown – I’m sure you’ve seen it. In essence, they claim, based upon their ‘study,’ that the lockdown is essentially unnecessary.T

Two doctors! People concluded that they must know what they are talking about!

Both situations took me to write the quote above and send a tweet. I ended up engaging in a bit of spirited online dialog with people who, in my opinion, should know better. Suddenly it seems that everyone knows science better than the scientists; the science of virology is better understood by people who no background in this medical specialty. People who are experts in a narrow field suddenly seem to be experts in everything.

The result? That California video? Their ‘random sample’ upon which they based their observations consisted of the people who actually came into their clinics – a small subset of the population at best. That’s about as random a sample as someone choosing all the green jellybeans from a bowl – and the proclaiming that all jellybeans are green. It was bad science. It got millions of views by people who want to believe what they want to believe, not the reality that exists.

Bad science is bad science. It misleads people, gives them false hope, and accomplishes nothing.

People should know better. Rant over.