Home   >   Blog   >   Daily Inspiration: “Have you ever noticed people periodically forget why something is an absolutely terrible idea?”

Daily Inspiration: “Have you ever noticed people periodically forget why something is an absolutely terrible idea?”

“Have you ever noticed people periodically forget why something is an absolutely terrible idea?” – Futurist Jim Carroll 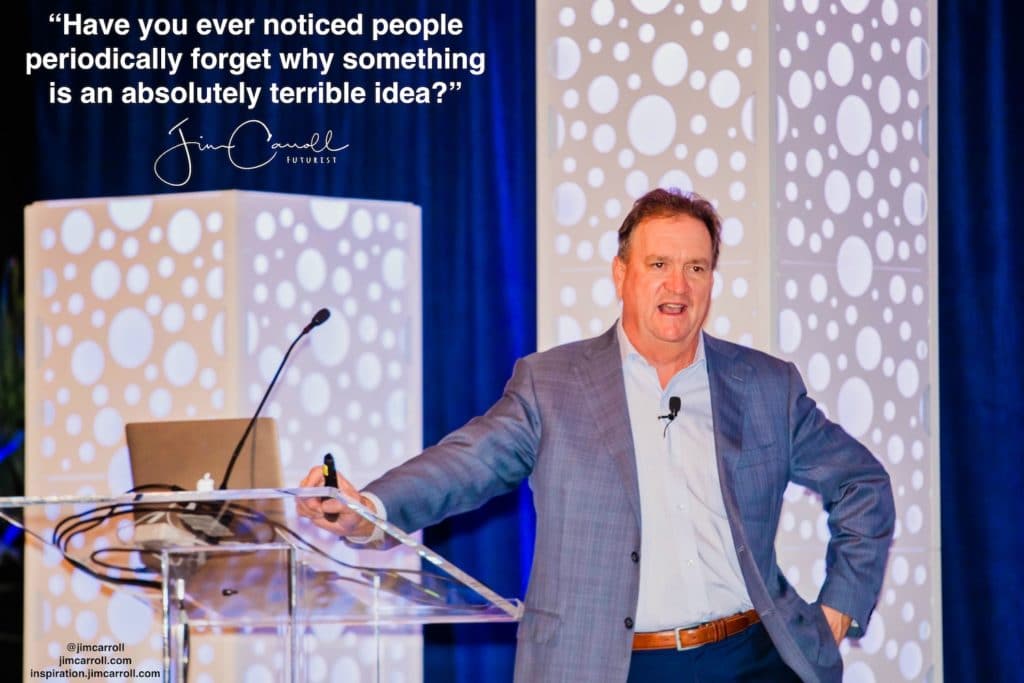 And once the terrible idea results in some sort of epic business or personal failure, it is usually followed on the other side by the observation that “it seemed like a good idea at the time!”

The sad thing is that the behaviours and decisions that lead to these sorts of failures are usually repeated, cumulative, a repeated series of actions and failed results.

For some people, their life has become a whole bunch of ‘good ideas at the time’ strung together in one continuous, never-ending series of debacles. For some organizations, a corporate culture is embedded in which rash and ill-formed decisions are the norm. Hence, you are surrounded by an army of imbeciles.

From another perspective – maybe it is really a great phrase and indicative of powerful action and inherent learning.

With that in mind, consider this extract from “SIGCSE ’11: Proceedings of the 42nd ACM technical symposium on Computer science education. – March 2011” which specifically uses the phrase as a springboard for insight!

“We often learn of successful pedagogical experiments, but we seldom hear of the the ones that failed. For this special session we solicited submissions from the SIGCSE membership, selected the best from among these, and will have presentations at the session by the selected authors. Our contributions describe pedagogical approaches that seemed to be good ideas but turned out as failures. Contributors will describe their pedagogical experiment, the rationale for the experiment, evidence of failure, and lessons learned.”

So while terrible ideas are often just that – terrible ideas – they are also indicative of people and an organization that is willing to try ideas, pursue new concepts, and explore new discoveries. In an era in which everything around you is changing quickly, maybe that’s actually a good thing!