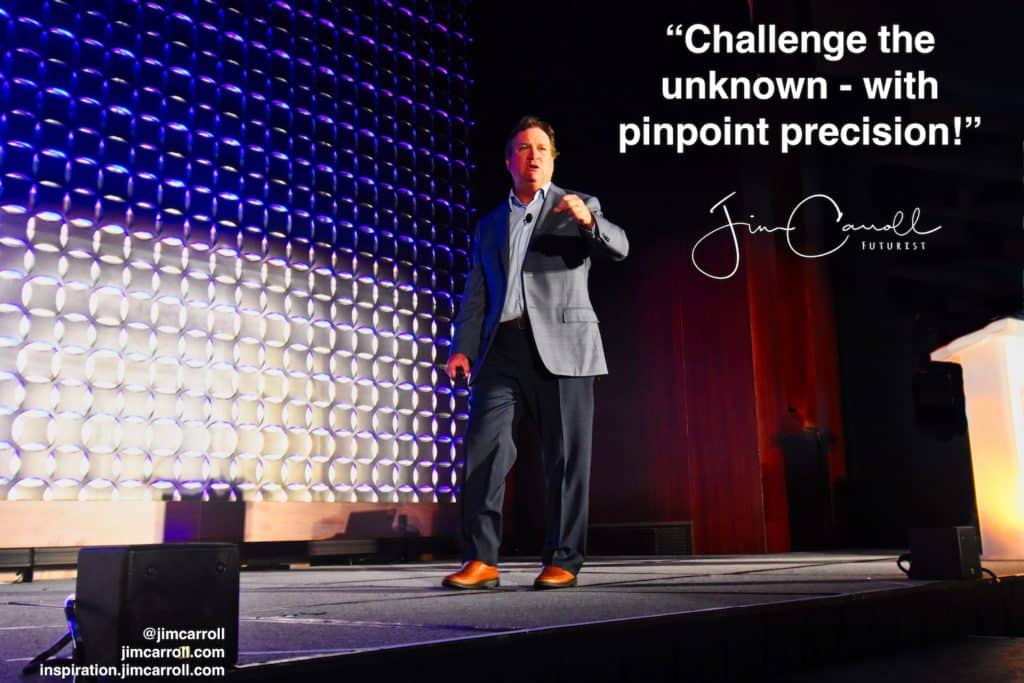 There’s a lot we don’t know about the future – as a futurist, I can certainly tell you that with a lot of certainty!

Yet what you don’t know can definitely hurt you – and that’s a bit of a problem!

And so when it comes to the unknown, the challenge is how – and when – to act.

Obviously, standing still won’t work. Yet at the other extreme, actions that are too bold, too aggressive and too all encompassing can do you too much damage if things don’t run out the way you thought they would.

The key is finding some sort of middle ground.

How do you do that? It relates to a phrase I will often use on stage with my audience within a Q&A of an event – when I am asked about the accuracy of my predictions: “My job is not one of precision, but at least getting the aim right.”

You might have a lot of unknowns in your life, your business, your industry. The key is to at least be doing things – acting, innovating, changing, adapting – even if you aren’t sure of the final outcome. There are some trends with a high degree of certainty as to their eventual outcome; there are others that don’t offer such clarity.

An example? We *know* that in the long run, the majority of cars will be autonomous, electric, self-driving, different form factors. Pretty much everyone is in general agreement on that trend.

The biggest is – when, how, who? There’s a lot of uncertainty around those issues. But that doesn’t mean people & companies should stand still. Act – do – innovate!

There’s a phrase from Pink Floyd’s ‘Dark Side of the Moon’ that has always inspired me : “Well you wore our your welcome with random precision.” It’s alluding to the challenges that founding member Syd Barrett faced with mental illness.

Yet I love the phrase ‘random precision.’ The very phrase is an absolute contradiction – and so too should the actions you follow each and every day as you deal with the great unknown!

That’s because while you might not know *exactly* what is going to happen, you’ll often have a pretty rough idea of the direction in which things are trending.