Daily Inspiration: “Try as you might, you can’t mask your mistakes and hide your failures forever!”

“Try as you might, you can’t mask your mistakes and hide your failures forever!” – Futurist Jim Carroll 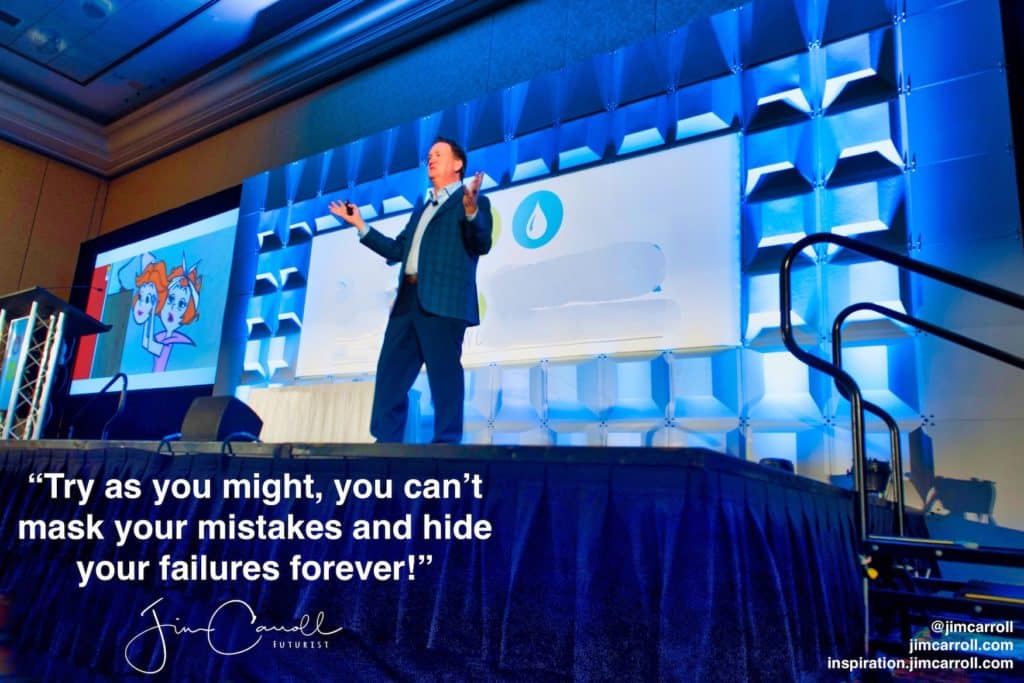 Your world has likely become so complex that each and every day, you are like Jane Jetson: you put on a brave mask, some body armour, protect yourself with some attitude – and charge out into the world!

But before you know it, the mask becomes a crutch, the body armour not only protects you from others – but shields you from yourself. You become really good at trying not to acknowledge your mistakes, and don’t take the step of learning from what has gone wrong.

I spend *way* too much time with organizations who try to hide any type of failure as quickly as they can. That’s wrong!

I view some types of failure as a positive thing – it’s stepping stone, a platform for learning, and an opportunity to gain the insight to do it better the next time around.

I’ve often said that if we are running internal leadership innovation awards presentations, we should equally reward the failures alongside those who have succeeded – because both have had the courage to step out of the norm.

What you should really be thinking about is how to accelerate your opportunities for moving forward by focusing on successful failure! That idea is the root of the phrase, “fail early, fail often!” The result of trying to hide failure is that you try to avoid it at all costs, but sometimes it is a GREAT thing. We’ve been conditioned to believe that “failure is not an option” – but it should be!

Bottom line? One of the best ways we learn is from failure. If we follow that line of thinking, the more we fail, the more we learn!

So rather than viewing failure in a negative light, we should view it as one of the most positive things we can do! Rather than hiding failure, shine a light on it, and turn it into an opportunity.

It’s better to focus on having an open failure than it is to continue expending continual energy on hidden mistakes!