Daily Inspiration: “If your belief system is based upon the unbelievable, why do you keep complaining when it goes wrong?”

“If your belief system is based upon the unbelievable, why do you keep complaining when it goes wrong?” – Futurist Jim Carroll 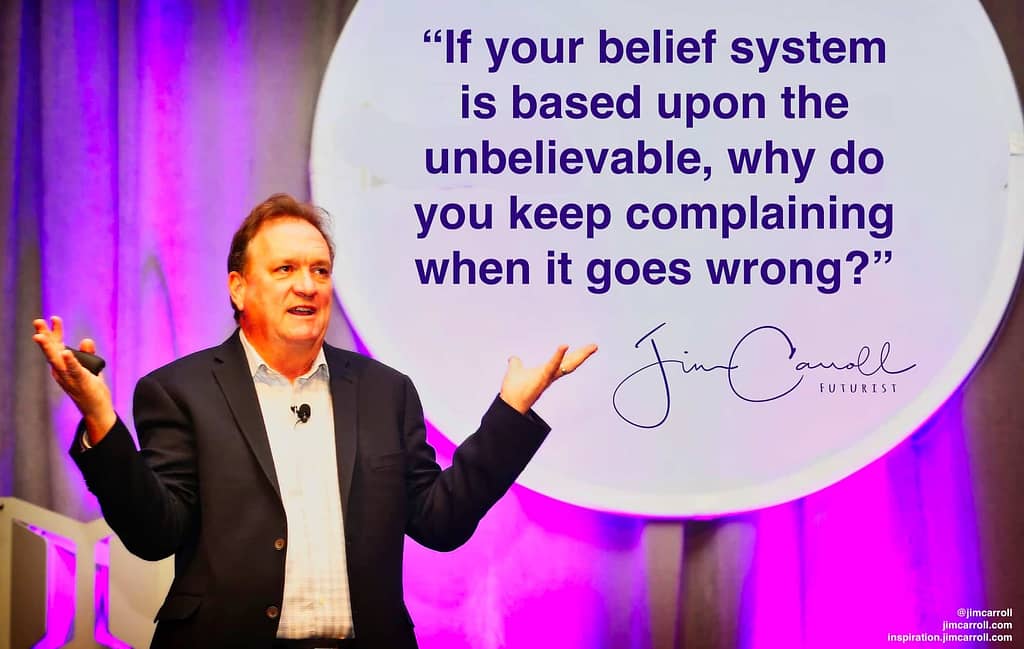 People believe what they want to believe. And it leads to some really odd circumstances.

The world just watched as a ‘deal’ was reached – then news emerged that ‘the deal’ was really something that was agreed to months ago.

Now consider this: many of the people out on the growing portion of the lunatic fringe of society will believe, based upon the statement they heard from some guy, that a ‘great deal’ has been reached.

The sane part of the world? The reaction is, “for real? What’s with these people?” Clearly we live in a time in which people choose their own reality.

An interesting implication of a broken belief system is that it extends into other industries. With that thought in mind, I’d encourage you to read a blog post I wrote quite some time ago, “The Emerging Health Care Reality Crisis.”

Go and read the full post. Study the maps.

Their belief system will increasingly drive their attitude and understanding of their healthcare circumstances. …

Then I write: “Many will die an early death.”

I’ve been waiting for someone to tell me I’m wrong with this predictive trend.

And so here we are: for many folks, the end game of this era of disbelief will be to discount anything they are told by anyone, including, most likely, the healthcare system.

A broken belief system is leaking into everything else : disbelief that your business model is broken, product line is irrelevant, or that customers don’t want your stuff.

Choose what you want to believe.

The rest of us out here in reality-land marvel at your stupidity.