Daily Inspiration: “Never underestimate the ability of those around you to try to destroy your optimism!”

“Never underestimate the ability of those around you to try to destroy your optimism!” – #Futurist Jim Carroll 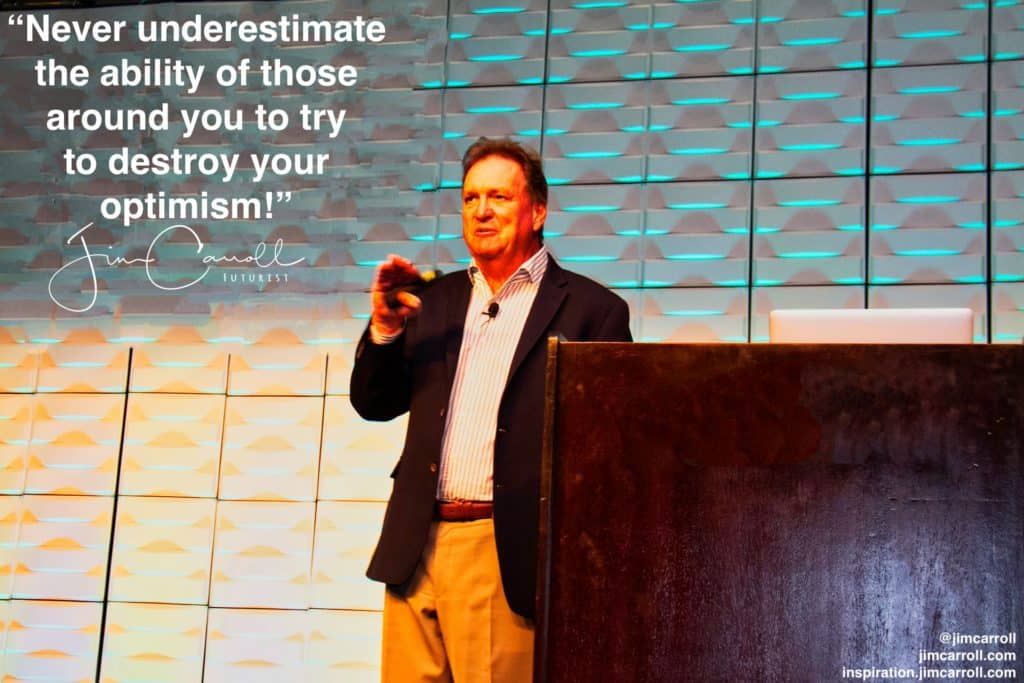 Imagine going to an event, and there Is a de-motivational speaker on stage:

“You suck! You are pathetic losers! You have no hope! Why do you even try! You have got nothing! Your chance of success is less than zero!”

I haven’t seen many of those folks appear on stage.

In a way, my strange job as a futurist who prowls stages around the world pays me to be an optimist. After all, I wouldn’t have much of a business if I walked on stage and said, “guess what – your future sucks! You’re doomed! It’s all bad! All the trends are negative! There is no hope!”

It wouldn’t be much of a business model!

Why this focus on optimism? Many people want a hopeful view of the future, and seek insight from others that that provides them with a sense of hope that things will turn out ok. Something that validates their desire for positive change.

So while some people see a trend and see a dark cloud, I see sunshine! While they look around them and see a lot of negativity, I look further for positivity.

When they go low, I go high.

So is all this relentless optimism of mine a fault?

Maybe, but I’ve been conditioned to think in this way ever since I had my epiphany on the potential impact of technology back in 1982, when I first signed into the online world on a Radio Shack Model 3 computer. It is being sorely tested these days with social media and elections; hacking and scams; lousy IOT implementations and more.

But that said, I en-energize my optimism every day – I return to the well of hope.

“Relentlessly optimistic” – that’s what some people call me. As a futurist, that means I’ll speak to a trend and 90% of the time, cover its potential for positive change.

Do I acknowledge the potential downside, the risk, the negative? Most definitely – but its not the core message I bring to the stage, to my writing and to my observations.

Because without optimism, you lack the oxygen of opportunity!