Daily Inspiration: “There is a special place in the future for those who innovate, change and adapt!”

“There is a special place in the future for those who innovate, change and adapt!” – Futurist  Jim Carroll 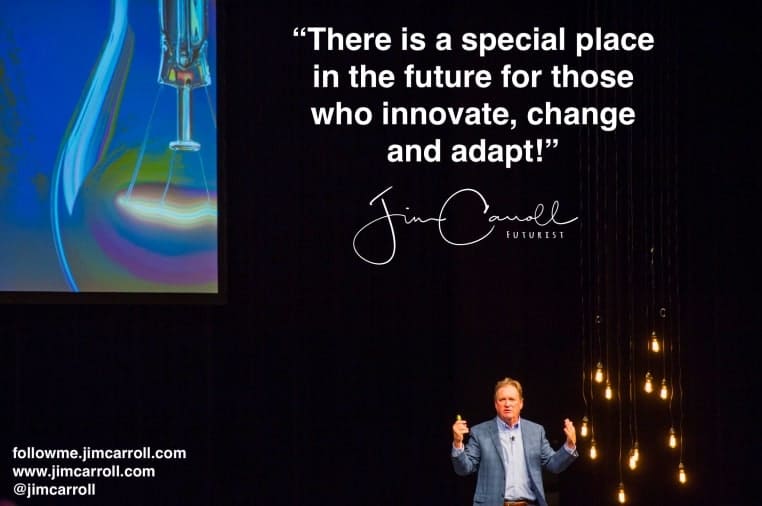 Of course, as a nice Canadian, notice that I didn’t say that there is a special place in hell for those who *can’t* innovate, change and adapt. That’s because some folks have the maturity, insight, skills, political systems and capability to take themselves into the future.  Clearly, other people don’t.
I don’t know about you, but temper tantrums never worked for my 2 year old! The interesting thing about the world today is that many of the jobs which disappeared, went away because the future happened. Robotics, new forms of automation, re-skilling of a workforce, efficiencies and new methodologies.
Some people companies and nations kept up. Others did not. Today, the results are there. Those are facts. Some people don’t like facts, and if that’s you – unfollow.
If you do like facts, here are some facts: – in 1960, 24% of the US labor force was involved in manufacturing, while today, that number is 8% (yes, 5 million jobs have vanished) – robotics and intelligent manufacturing technology has replace far more US workers than have Mexican or Chinese faciltiies – today US factories produce twice as much stuff as they did in 1984 but with 1/3 fewer workers – manufacturing as a % of GDP is virtually unchanged since 1960 – much of US manufacturing has shifted from the rustbelt states of Pennsylvania, Ohio and Michigan to Southern states, much of which has involved significant new intelligent facilities
Here’s the thing. The future is going to happen. The rest of the world will get there. It really seems right now that people in the US need to determine if they want to be part of it right.