Daily Inspiration: “If gravity is holding you down, launch into a different trajectory!”

“If gravity is holding you down, launch into a different trajectory!” – #Futurist Jim Carroll 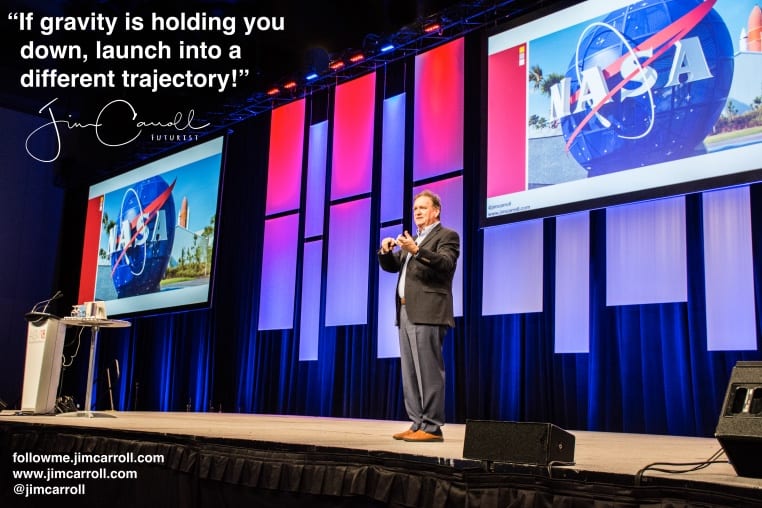 I’m a futurist. My background? I’m a professional accountant, aka CPA.
That’s kind of weird, isn’t it? It shouldn’t be. Years ago, I made a bold decision with respect to my career that set me on an entirely new path, where my insight is sought by some of the most fascinating organizations in the world.
Such as NASA! They have had me in twice (!) for a talk that has focused, by and large, on the future of space & the space industry!
I remain convinced to this day that one reason why I’ve managed to build this unique career is because of the business insight I developed during those early years, from 1979 to 1989, when I was with what is now the world’s largest public accounting firm. Later this morning, I’ll be on stage in front of several hundred of my accounting peers, talking about the fast paced trends which are reshaping our world. I’ll share them the key strategic thoughts they need to focus on to ensure their clients, or the organizations they work for, are aligned to these trends and can adapt.  How does one go from being an accountant – to a futurist? Long story, but 10 years before it exploded into public consciousness, I was online with the precursors of what became the Internet.  I was convinced something big was happening – something transformative that would forever change the world. It only made sense to me that if we were ‘going to link together all the humans in the world’ through computers and devices, that big change would come. I tried to have the firm that I worked for understand the scope of the change – and many viewed me as a madman, spouting incoherent rubbish.  I felt that I was being held back – my imagination was being stifled. With the support of my wife, I quit my job, started doing some technology consulting -and evolved into this fascinating career.
I was being held down by gravity, and I broke free! What decision will you make today to free yourself from your own personal chains of gravity?