“The most important trends are probably the ones you have never heard of!” – Futurist  Jim Carroll 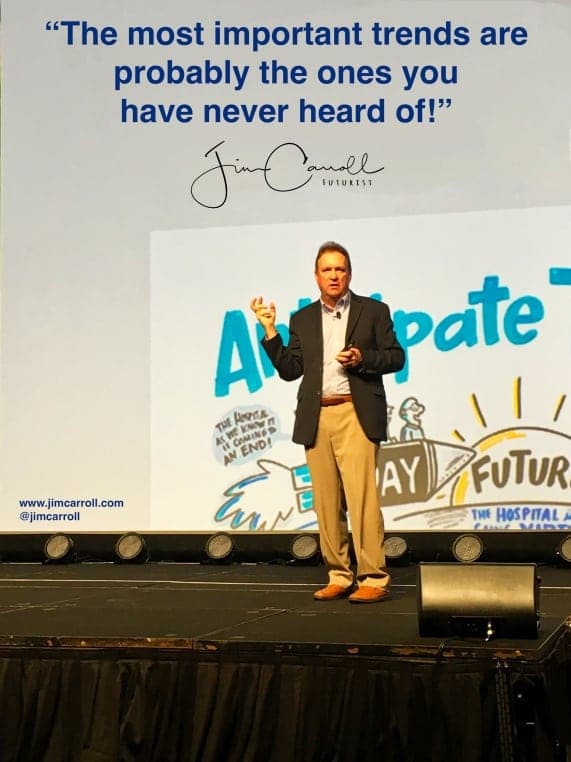 “Such as, spatial data bubbles! You are living in a few right now; you’ll live in many more of them, and your day to day activities will be determined by what you do in them!

Including, for example, how well you exercise.

What are they? Learn about them in my blog post, “Spatial data bubbles Are Going to Be a Big Part of Your Life: And Why You Need to Know What They Are!”

Last week, I was the opening keynote speaker for the annual SOMOS Toll-Free Users Summit – it’s the annual conference for the folks involved in the 1-800 industry. Obviously, there was a big focus on the issues of customer support and interaction, and my keynote took a look at those trends. 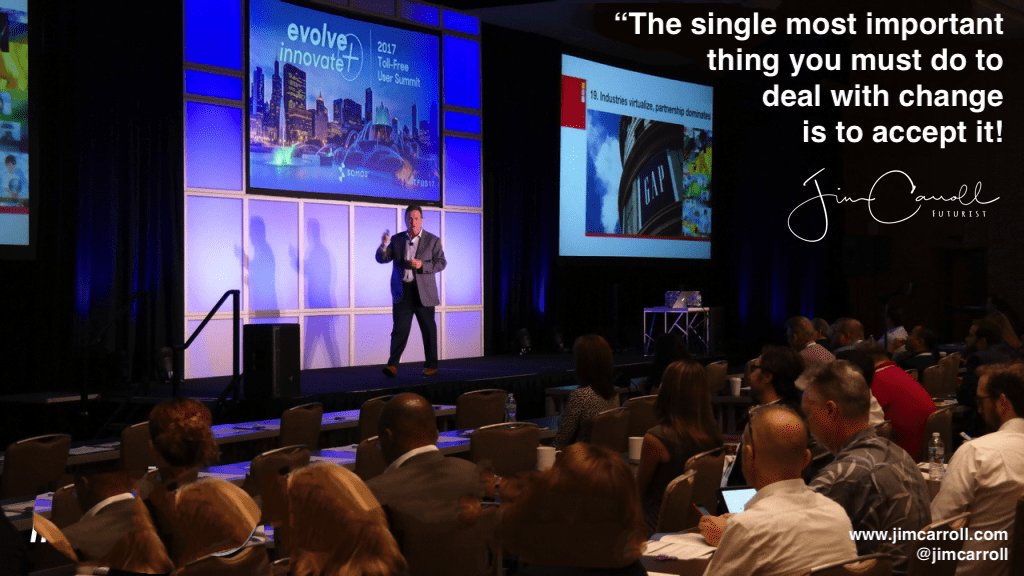 They’ve just run a blog post that captured one of the key themes in my keynote : that is, how do we keep up with the fact that consumer and customer demands are changing faster than ever before!

END_OF_DOCUMENT_TOKEN_TO_BE_REPLACED 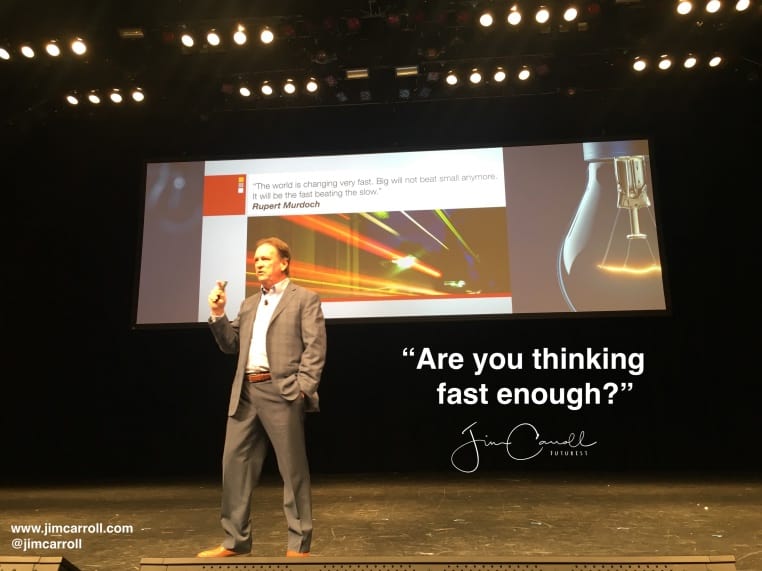 From my keynote yesterday for 500 CEO’s and senior execs at the Edge Forum in Vancouver. My talk focused on “The 20 Trends Driving the Era of Acceleration and Disruption”

Imagine a room full of 300 CEO’s and senior executives, and you get the McKay CEO Forum, one of the pre-eminent senior level events in Western Canada. I did a wide ranging talk on the theme of disruption and industry transformation, putting into perspective the stark trends that are impacting and reshaping every industry at a furious pace. 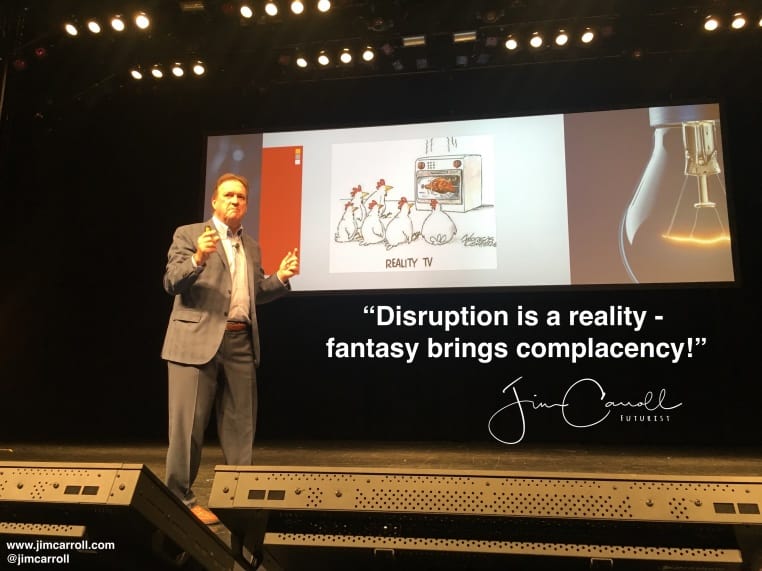 “Don’t be overwhelmed by the challenge, intimidated by the effort, nor complacent about the complexity of the voyage. Instead, be inspired by your passion for the purpose, the ultimate goal of the project, always in awe of the impact of your efforts!” – Futurist  Jim Carroll 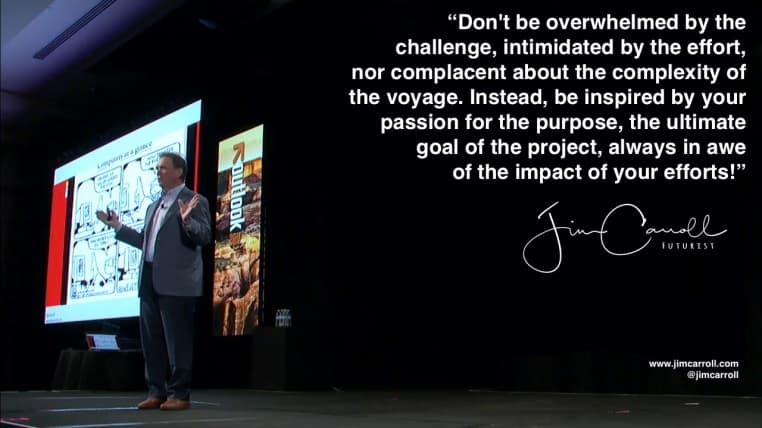 ‘’ #disruption #innovation #change -> I’m in Vancouver this morning, where I will talk to 600 CEO’s this after at the McKay Edge Summit. I’m followed on stage by Rick Hansen, a Canadian Paralympian, activist, and philanthropist for people with disabilities.
With that, today’s quote was pretty easy to come up with. He’s an inspiration, and I hope to meet him and watch his message!’’

The BBC gave me a call to chat about what is really going on with the Internet of Things (populalrly known as IoT) … and ended up running a great summary of our conversation. 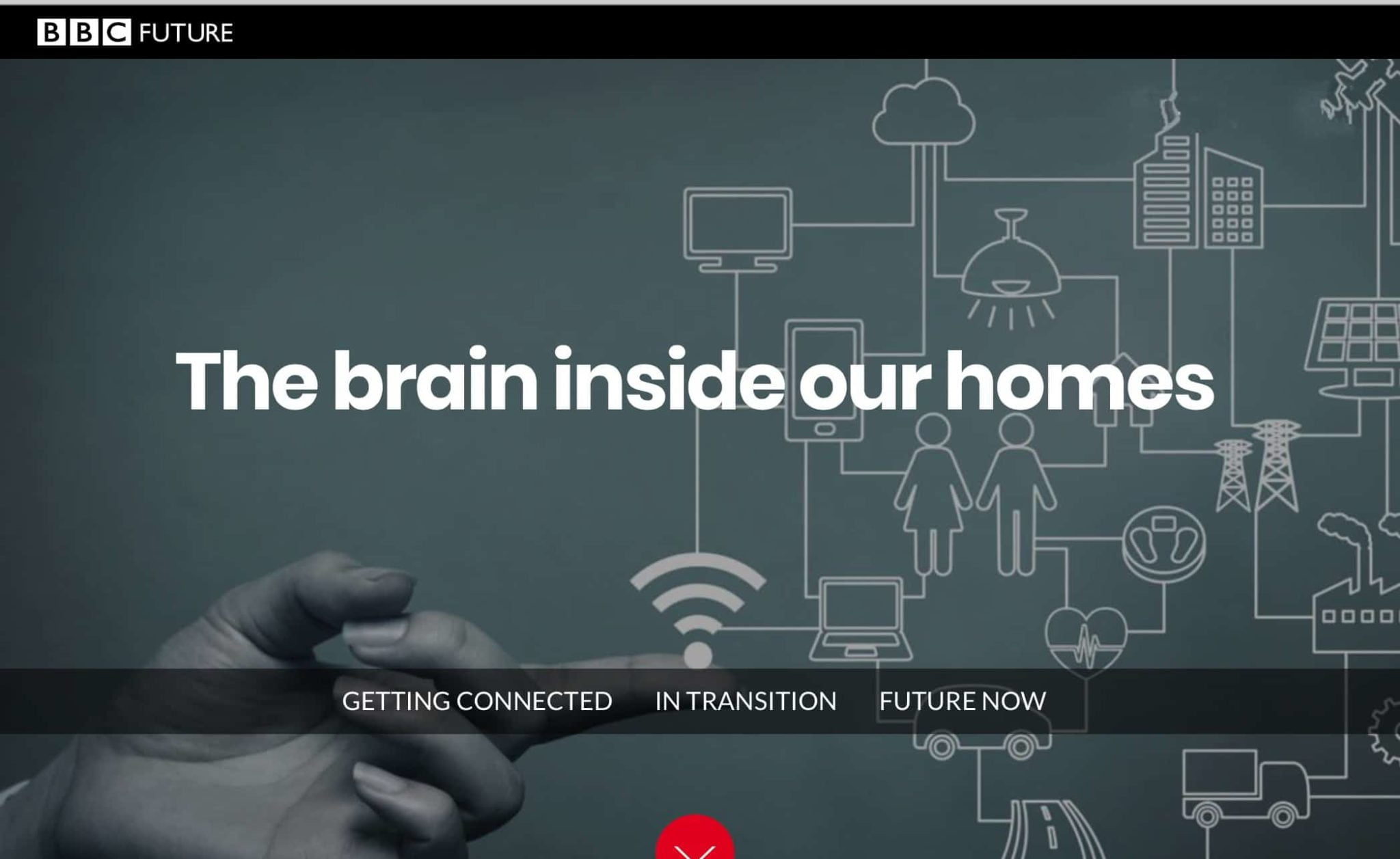 The article captures the essence of my thinking that it is very early days yet with IoT. We’re at the starting gate in building the most complex machine ever built, and we’ve got a lot to learn in terms of architecture, security, and its’ role.

Read more about those issues here and here. I’ve been speaking about IoT for over 20 years : a good example is here. And even here, where I talk about the changing role of light bulbs in the era of IOt.

Give the article a read, and see if you agree.

The Brain Inside Our Homes
BBC, October 2017

The most humble of objects can join the connected world, thanks to what is known as the Internet of Things – the interconnection via the internet of computing devices embedded in everyday objects, enabling them to send and receive data. Smart bathroom scales can log weight and body mass index, then feed the data back to a Fitbit wearable for action; networked dog collars can track a pet wherever it roams, help with training and even detect pain; Amazon’s checkout-free Go stores will allow shoppers to fill their bags and leave the store without queuing or even touching their wallet.

The Boston Consulting Group estimates the world will spend $295 billion on Internet of Things (IoT) systems and devices by 2020.

Yet, according to futurist Jim Carroll, the concept is still in its infancy.

Engineer and futurist Roy Amara observed that people tend to overestimate the effect of a technology in the short run and underestimate it in the long run. Similarly, Carroll believes that when it comes to the Internet of Things, the world is still in the era of inflated expectations that precedes a crash and is followed by more gradual adoption and global dominance.

“It’s like it’s 1994 or 1995 and the worldwide web has just arrived – we know that something big is happening here,” he says. “But there were lots of early experiments with websites and e-commerce. A lot failed. A lot were silly. And it took time to mature and figure out business models.”

The Internet of Things presents important challenges around security and privacy, which organisations are only beginning to explore. Many manufacturers are still shipping devices with default passwords and user IDs, leaving them ripe for hackers. Privacy legislation has yet to catch up to a world where a single household can emit thousands of data points every day – unconsciously sharing everything from the layout of an infant’s bedroom to the contents of their refrigerator.

Experts agree it is still too early to identify which of the myriad IoT businesses will become the new Amazon, PayPal or eBay. No one can predict which will face the fate of dotcom bubble victims such as Pets.com or Boo.com, or prove, like the various virtual currencies that preceded Bitcoin, ideas ahead of their time. Yet some industries are clearly ripe for disruption.

By 2020, over-60s will outnumber under-fives around the world. By 2050, there will be two billion people aged over 60 worldwide. In an ageing world, cost-effective elderly care is critical. From wearables that track vital signs through to emergency response systems, virtual assistants and perhaps even internal smart devices swallowed like pills, the Internet of Things will help the elderly live in their own homes, with dignity, for longer. Google and Novartis are developing a smart contact lens for diabetics that won’t just correct vision but will track blood sugar; even the humble floor is getting smart, with systems to detect falls – and ultimately, perhaps, prevent them.

“I talk to healthcare groups about virtualisation, remote blood pressure cuffs, diabetes monitoring and more,” Carroll says. “We can rethink the concept of care and re-engineer senior care. We can architect a world where seniors are in their own homes and connected by these devices.”

If climate change is the single biggest threat our planet faces, then the smart grid is key to the European Union’s battle against it. By 2020, almost 72% of EU consumers will have an electricity smart meter, part of a smart grid rollout that could slash the union’s carbon emissions by as much as 9%. By saving energy on operations, helping consumers monitor their usage and even feeding stored solar energy back into the grid, smart meters reduce a household’s carbon footprint. Networked to IoT devices elsewhere in the home, such as thermostats, lighting controllers, refrigerators and washing machines, they will cut emissions even further.

Globally, one-third of all food produced for human consumption is lost or wasted – that’s over 1.3 billion tonnes every year. For food businesses, IoT technology can help cut waste, whether by monitoring perishables on their journey from farm to store or identifying patterns that cause food to end up in the rubbish bin. In the home, smart refrigerators can warn when food is approaching its use-by date, send real-time information on their contents to a shopper in the supermarket to avoid double-buying – and, of course, remind consumers when to stock up on milk.

The Internet of Things is central to the worldwide Smart Cities movement, which itself links closely to global climate action goals. “We can give internet connectivity to all kinds of devices,” Carroll says. “Like a light pole. We can stick in environmental sensors and turn it into a FitBit for the city. We can put charging stations in it, for charging electric vehicles with credit card transactions. It might become part of an intelligent highway solution, where it’s monitoring traffic, interacting with cars, fining drivers using high-occupancy vehicle lanes.”

In California, the city of San Diego is upgrading some of its streetlights to install 3,200 sensors, transforming them into a connected digital network. The anonymised data should help monitor traffic, pollution and carbon emissions, identify crimes and assist first responders, and even help visitors find a parking place.

And in Taiwan, the engine room that fabricates many of the hardware that powers the Internet of Things, government and mayors are embracing the Smart Cities movement. The nation that manufactures the Amazon Echo smart speaker hosts an annual Smart Cities summit and is equipping its own urban centres with a low-power wide-area network tailored to the Internet of Things.

In the capital, Taipei, a network of sensors already monitors pollution – driverless buses that collect data on road conditions and traffic are undergoing trials. Local smart scooter start-up Gogoro, which operates on user-swappable batteries, just launched its first solar-powered charging station. In the southern city of Tainan, Acer has developed a smart parking app that enables users to find parking spaces quickly, as well as paying parking fees and parking tickets through a licence-plate recognition system. It was also in Taiwan that German luggage-maker Rimowa chose to launch its smart-tag system, meaning passengers on EVA Air could check in their bags via smartphone, saving time at the airport.

It’s this electronic alchemy – transforming everyday objects such as parking meters or luggage tags with the power of the network – that Carroll sees as the most life-changing element of the Internet of Things. “That’s what gets me excited,” he says. “Not any particular type of device, but how we can fundamentally transform anything so it can do so much more than we thought possible.”