Future of Flying Cars? Take a Drone, and Stick a Human In It! 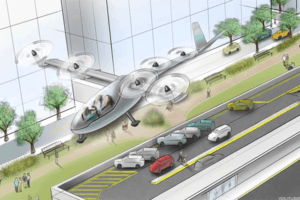 While leaving Heathrow airport yesterday after a keynote, I was contacted by The Street for my thoughts on an initiative by Uber to build a flying car.

Crazy science fiction? Maybe not. After all, simply scale up today’s drones, add a human to them, and you’ve got a flying car!

You’ll find my comments below. A key point – tech companies in every industry innovate faster than legacy companies. That’s a big challenge, and the biggest issue for every industry as disruption continues.

Uber has hired 30-year NASA veteran engineer Mark Moore to help its Elevate division design flying cars that will take off and land vertically so it can easily transport commuters in crowded urban areas, Bloomberg reported on Monday. His official title will be director of engineering for aviation.

The company first outlined its vision for the futuristic service in a 97-page white paper in October and claimed it could launch as early as 2026. In its vision of the future, air taxis will transport commuters between aircraft hubs known as “vertiports,” which would be located between 50 miles and 100 miles of each other.

“Just as skyscrapers allowed cities to use limited land more efficiently, urban air transportation will use three-dimensional airspace to alleviate transportation congestion on the ground,” the company wrote.

Moore makes sense for the project, considering he wrote a white paper in 2010 on VTOL (vertical takeoff and landing) cars to be used for daily commuting. His paper impressed Alphabet co-founder Larry Page so much that he helped launch flying car startups Zee.Aero and Kitty Hawk to bring Moore’s vision to life, Bloomberg Businessweek reported.

When most people hear about flying vehicles, they think of the futuristic show “The Jetsons” that ran from 1962 to 1963 as a picture of what the world would look like in 2062. Of course, it included flying cars.

Noted futurist Jim Carroll told TheStreet that a lot of the inventions featured in that show are “becoming real sooner.” Both the Apple smartwatch and video and picture sharing app Snapchat could be compared to similar items featured in the TV program. “Trends are accelerating and the future is coming at us faster,” Carroll explained.

Another example of how quickly new technology is being developed are drones, or unmanned flying aircrafts, which have already gone mainstream, he pointed out. “Scale up and stick a human in there,” he said jokingly.