Why SOPA is fundamentally wrong 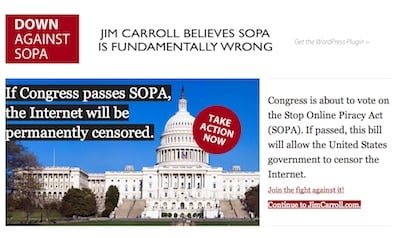 You will have no doubt discovered that a good portion of “the Internet” is protesting what is a fundamentally poorly thought out, and most likely dangerous, Act(s) proposed by the US Congress – SOPA and PIPA.

These Acts would essentially hand over power to the US government to effectively censor and shut down any Web site in the world. Regardless of where that site happens to be, and regardless of the law that site is subject to. The US Attorney General could, on a simple complaint, take action that would provide little recourse to anyone affected.

Effectively, as I understand it, the bills would in effect place complete power in the hands of the US government to fundamentally censor and control any information appearing on the Internet. Seriously. If you think this through, that is what it leads to.

The STOP SOPA campaign is not led by a series of wing-nuts or lefties or whack-jobs or people with an axe to grind. It is a grassroots campaign by people throughout the US, and increasingly around the world, who understand what is at stake here.

The proposed Acts are fundamentally wrong, dangerous, and without getting into rhetoric, the biggest danger to global freedom in many years. That is why there is such a fuss going on.

I’ve been online since 1982 – long before the Internet really became the Internet. I’ve been in awe of the power of global connectivity for 30 years.

I am in a state of shock that proposals such as SOPA and PIPA could make it even this far. We have in our hands the tool that will help to take us into the future — and we are in a situation in which the innovation opportunities that this tool can be taken away at a whim. That is not an understatement – that is a reality.

What can you do? Get involved. Learn what is going on.

I’m trying to in my own small way. I thought about shutting JimCarroll.com down for the day to join the protest.

But that would not be helpful – not too many would notice.

But I do get a lot of visitors – including you. So please, please, take the time to understand what is at stake here.

I encourage you to visit the link at the top right of every Web page throughout JimCarroll.com – Stop SOPA. The small banner you see up there? Click it — read it – participate.

Take the time to learn about these proposed Acts of the US Congress — understand why they are wrong — and realize that the protest is not some ill-advised idea by a bunch of ‘computer companies’ or ‘computer geeks’ or other characterizations.

The Internet, in being perhaps the most important invention of humankind, is too important to be subjected to frivolous, ill-informed, ignorant and polticially-expedient decisions by people who really don’t know what they are doing. The US Congress proposals are just plain, simple, bad laws.

I believe the Obama administration got it right. “While we believe that online piracy by foreign websites is a serious problem that requires a serious legislative response, we will not support legislation that reduces freedom of expression, increases cybersecurity risk, or undermines the dynamic, innovative global Internet.”