What’s your tin can?

Have you been to your local grocery store as of late? Have you seen the StarKist Tuna plastic re-sealable pouch? That little package – a new product innovation if there ever was one – is responsible for almost $200 million in new revenue since it first hit the shelves. 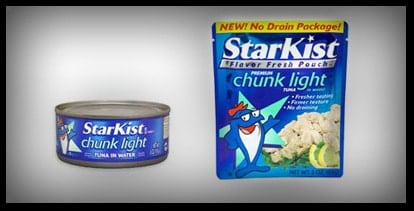 That’s not displaced revenue, but entirely new revenue that didn’t exist before.

It’s a big change – and it took a long time to come about. After all, StarKist sold tuna for 110 years in the same old way – in a tin can. Yet they finally managed to come up with something new, and the results are stunning.

The new tuna pouch is a good segue into what is perhaps one of the most important issues for innovators to deal with – getting people out of their tin-can rut.

How many people do you know who are stuck in a 110-year old rut? Still delivering a tin-can day in, day out, with no desire to change? Quite a few, I would guess. Maybe not for 110 years, but at least for the last few years.

After all, a lot of people have lost their motivation to change – the stock market downturn, the housing market collapse, the Wall Street scandals, a new distrust of government. Such constant negativity and so much failure has meant that many people and organizations have lost their innovative spirit. Who wants to try anything new today?

The result is that many people have lost their drive, their courage to go forward, and their willingness to change. They’re still making tin cans, when new re-sealable pouches could revolutionize who they are and what they do.

That’s why the StarKist story is so important. Here’s an organization that has somehow shaken away the complacency that enveloped it for over a century. It woke up to the opportunity that comes from real innovation. And the fact is, it’s all part of a reawakening that is underway throughout the food industry, in which — the package is the brand.”

Over the last decade, food and packaging companies have come together in a partnership that redefines how new products are developed. Packaging companies, previously restricted to the sidelines, now take a lead role in the development of new product. Food companies, who used to be the only ones responsible for new products, now realize that if they are willing to open up their minds to a new way of doing things, they can see some darned powerful results.

Is your organization stuck in a rut? Is your culture representative of an industry that is still making tin cans? If so, what are you doing to try to wake them up? It’s an important question, and with world that continues to evolve at an ever-increasing pace, one that needs to be addressed.

What’s your tin-can? Think about it.