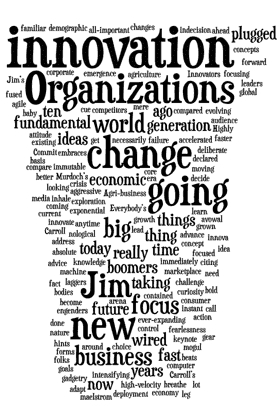 I was the opening keynote speaker for CropLife Canada back in December; this article just came in, summarizing my keynote:

Jim Carroll’s keynote address on innovation – while offering solid advice for rising above the current economic maelstrom – contained some immutable truths: baby boomers in business could learn a lot from the ‘wired generation’ who have grown up with computer gear virtually fused to their bodies. Representing more than mere gadgetry, this technological panoply is in fact symbolic of an attitude which unselfconsciously embraces change, promotes exploration and
engenders innovation in all possible forms.

The simple, demographic reality, Jim Carroll declared, is that the post-baby boomers “are the folks who are going to play the primary role in moving agriculture forward into the future. This wired generation is taking the reins of power. They inhale change. They breathe by technology.” Agri-business can take a cue from their curiosity and fearlessness by scrutinizing existing corporate notions of innovation, intensifying focus and taking deliberate action.

Jim’s observations as a trend-spotter lead him to state that the economy, by nature, is volatile. It is transitional. Periods of economic crisis have occurred time and again; as such, there is no need for panic, pessimism or what he terms ‘aggressive indecision’.

“My challenge to you is: when do you start to innovate? Are you going to wait until we’re out of this thing? What innovation leaders do is to decide, ‘Okay, we’re in a period of uncertainty, a rough time… but we’re not going to be innovation laggers. We are going to focus on innovation as a core strategy right now.'”

The familiar phrase ‘rapid change’ scarcely hints at today’s rate of change in the marketplace, with emergence of new business, new competitors and ever-expanding consumer choice. Highly accelerated changes in the business arena now call for split-second response, so the all-important question is, ‘How do we become a high-velocity organization?’

“We’re in an era of instant obsolescence,” said Jim, citing media mogul Rupert Murdoch’s avowal that with the world evolving so rapidly, it isn’t necessarily the big organizations that are going to control the future. “It’s the fast organizations, the agile organizations – the organizations that can change quickly who will have a leg up. Fast beats big anytime.”

Stay focused on opportunity. Set bold short-term goals. Commit immediately to three new ideas. Jim urged his audience to reframe the concept of innovation itself by turning fundamental concepts upside down. “Innovators get ahead by looking at the world around them and realizing there is an absolute ﬂood of new ideas and new ways of doing
things. ”

‘Think about our world today compared to ten years ago. Ten years ago, the pace of scientific advance was really, really slow. But compare it to today. Everybody’s plugged in; we’re all plugged into this global idea machine. What that’s doing is speeding up fundamental science on an exponential basis. So structure for velocity, focus on faster knowledge
deployment and partner up to better adapt to what’s coming. Think big by focusing on growth. You have to try to do things you haven’t done before. Innovation is all about risk.”