.
Home   >   Innovation   >   Focusing on growth in a perilous economy – how innovators win

Focusing on growth in a perilous economy – how innovators win 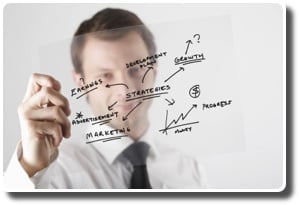 There’s a lot of research that goes into every keynote and workshop I undertake. Recently, one key theme has been looking at how innovators break through the recessionary blues, and create new markets and revenue through disruptive innovation. This was the theme of a recent column that I wrote, “Keep Those Ideas Coming.”

While preparing for a recent keynote for a Fortune 500 leadership event, I came across an an article from The Hindu newspaper from January 2009, which featured an interview with Vijay Govindarajan, Chief Innovation Consultant at General Electric in Chennai; he’s also a professor at the Tuck School of International Business.

Here’s a key observation from the article:

He has researched four U.S. slowdowns of the last half century: the oil shocks of the early 1970s, the crippling unemployment of the early 1980s, the recession of the early 1990s and the dotcom bust of 2000. “In each period, about 60 per cent of companies barely survived, while 30 per cent died. But the remaining ten per cent or so actually became breakthrough performers and that’s mostly because of the choices they made during the recession period.”

The key word there is choice. The choice that you need to make right now is to focus on growth, and particularly, growth through innovation.

Many of my recent events have involved having me on stage directly following the CEO of the client. I’ve been fascinated by what I’ve witnessed in the last few months. Many of these individuals, in their remarks, have quickly moved beyond talking about the recession (i.e. “we’ve got good strategies in place to contain costs to work our way through this thing“), and are immediately talking to their team about the growth markets and opportunities that they intend to pursue. They are challenging them to think about innovation in the context of opening new markets, enhancing existing revenue sources, transitioning the product line, moving beyond commodity products into a lineup with more inherent value; the list goes on.

It’s a critical and important leadership message, and I think it bodes well for the future potential of the economy. I have no difficulty finding and identifying growth opportunities in countless industries. It might take some time, and it’s difficult to think about growth with all the doom-and-gloom, but its there.