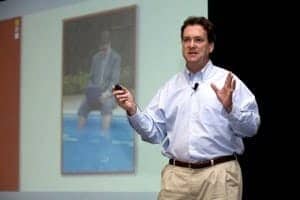 I’m keynoting a lunch tomorrow for a group of about 400 medical professionals. Their executive director saw me keynote a national conference of association executives two months ago.

That particular keynote was on a Friday in late September — and the executives in the audience had just been pounded by a week of bad economic news. Since then, the drumbeat of negativity has become only more intense.

I got up that morning two months ago, took a look at the news headlines, and went out and did a barnburner of a speech for an audience of 500+, on the theme, “where’s the growth, and how do we innovate for the future?” I was hugely upbeat, carried a positive message, and spoke to the audience at a very personal level about the necessity of having a strong personal compass to get through “this thing.” I remember coming off stage, and thinking to myself, “wow, that was one helluva talk.” As someone who earns a living on stage, you constantly self-assess as to how you’ve done.

I guess it did really strike a chord, since I’m still getting phone calls from folks who were in the room. So are the speakers bureaus who regularly book me into association events. The talk touched a lot of lives; it gave people an insight into the future that is all too easy to forget in this period of rapid global change.

People are hungering for a message of hope. Tomorrow, in my luncheon keynote, I’ll take a good serious look at the current economic pain, but will also challenge the audience to think about the real, long term, substantive trends which provide an opportunity for future growth. A part of my talk is built on my “Where’s the Growth?” document, originally released in February 2008. I just re-read the report, and can’t think of where any of the fundamental assumptions are incorrect, except for one on “infrastructure.” Maybe a company like Caterpillar might not see 30% growth because of overseas infrastructure spending.

But on the other hand, maybe they will! What is becoming increasingly apparent from the new US administration is that infrastructure spending is likely to be one of the key spending priorities to get the economy out of the funk and back into the future. That seems to be the approach of many governments worldwide. And hey, I had a post a few months ago, “Infrastructure is the new plastic.” Although the essence of the post might seem a bit jaded given the current spending pullback, put the post into a 5 to 20 year perspective, and it is probably still bang on.

Despite the challenges that you might find yourself in : THINK GROWTH!

My keynote tomorrow is titled, “Think Growth! The Good News for 2009”

Despite the relentless news headlines, there are many people out there who have an open mind about the future, and are actively innovating and thinking about how to capitalize upon it. I’m thrilled to be able to help them out.