Home   >   About Jim Carroll   >   Brand confusion in the global world

Brand confusion in the global world 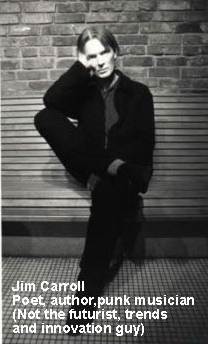 One fascinating aspect of the new world in which we find ourselves is that some companies have found that globalization has meant some very unique “brand management” challenges, as their brand or company names runs up against long-standing brand or companies from elsewhere in the world.

I’ve got the same interesting challenge, but from a very different perspective.

The “other Jim Carroll” is an extremely well known poet, Pulitzer Prize winner, author of the Basketball Diaries (which became a Hollywood movie, with Jim Carroll played by Leonardo DiCaprio of Titanic fame), and leader of the 80’s punk group, The Jim Carroll Band (best known for the hit, “Those are People Who Died.”)

There are many people on the Web who are looking for that Jim Carroll – he has an enormous global popularity, as seen by his Wikipedia entry.

I’m often told stories by people as to how they’ve found him when they are looking for me. Most often, this has been after a keynote somewhere or other; they’ve heard the name Jim Carroll and go off and do a Google search.

We both show up, of course. 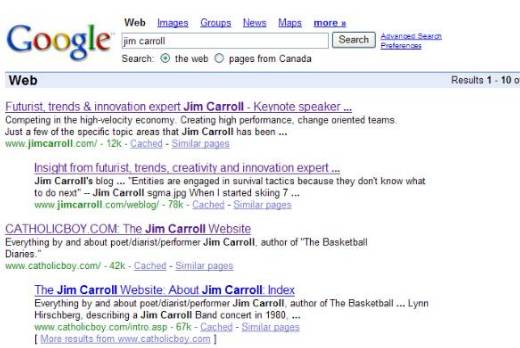 When they do their search, end up finding him, and kind of wonder about the poet aspect…..that’s why I’ve long had this page that links to the “other Jim Carroll,” in order to ease the brand confusion.

It certainly makes for interesting conversations!